Ultimate Guide To Food In Italy: 25 Dishes You Must Eat 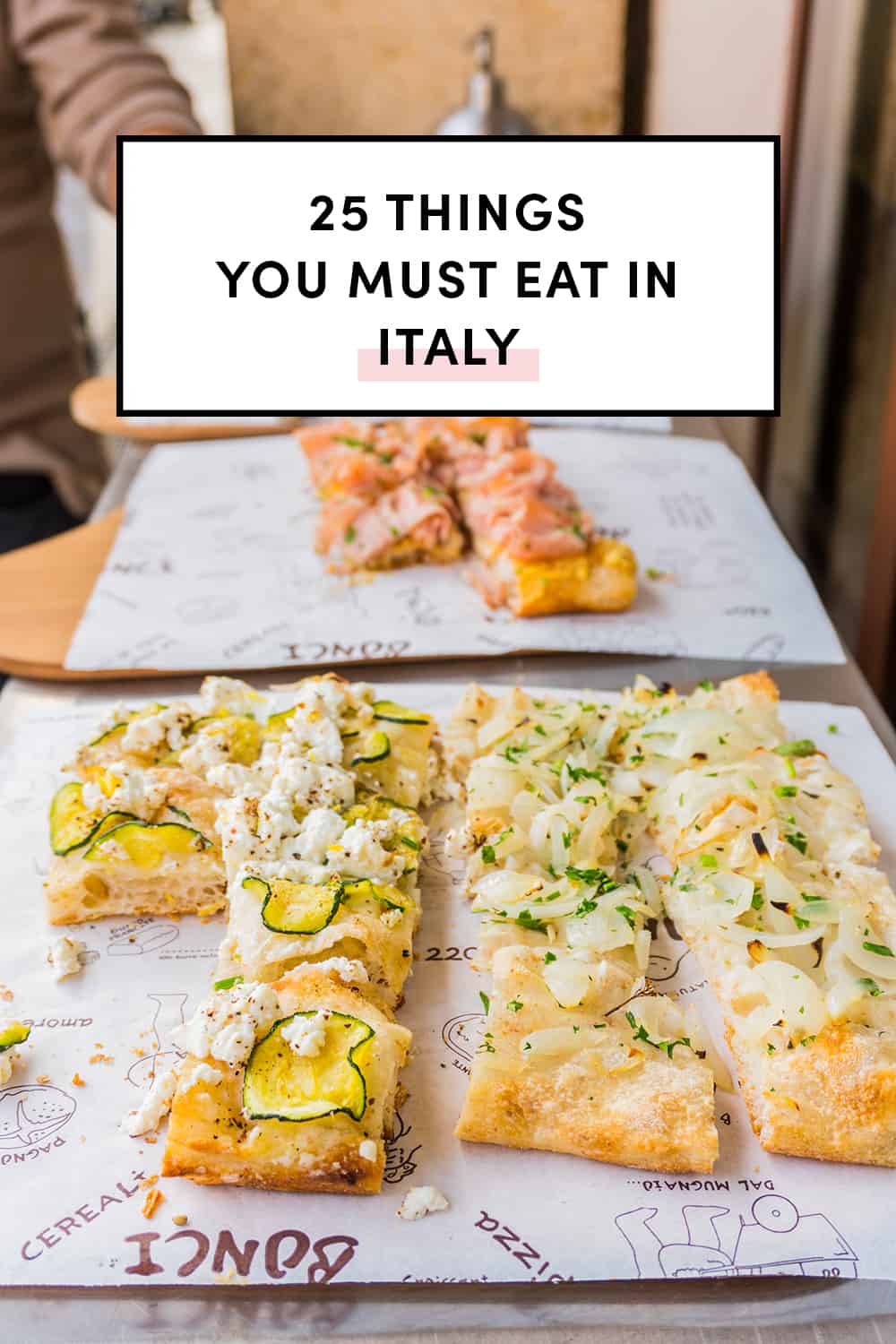 While vacationing in Rome for 10 days I ate nothing but food in Italy that was filled with carbs, a lot of carbs. The Italian diet: croissants for breakfast, pizza for lunch, gelato for dinner, & carbonara for dinner. Repeat. How do the Europeans stay so thin?

When I was in Rome, I booked the Taste of Rome – The Trionfale Foodie Tour. It was a 4-hour walking tour where we ate 18 different classic Roman foods. Our tour guide Morgan was from the States but has been living in Rome for 2 years now so I learned a lot about Italian food and culture in Rome during the tour.

Here are the 17 different kinds of food in Italy you have to eat in Rome (or even in Europe in general)! 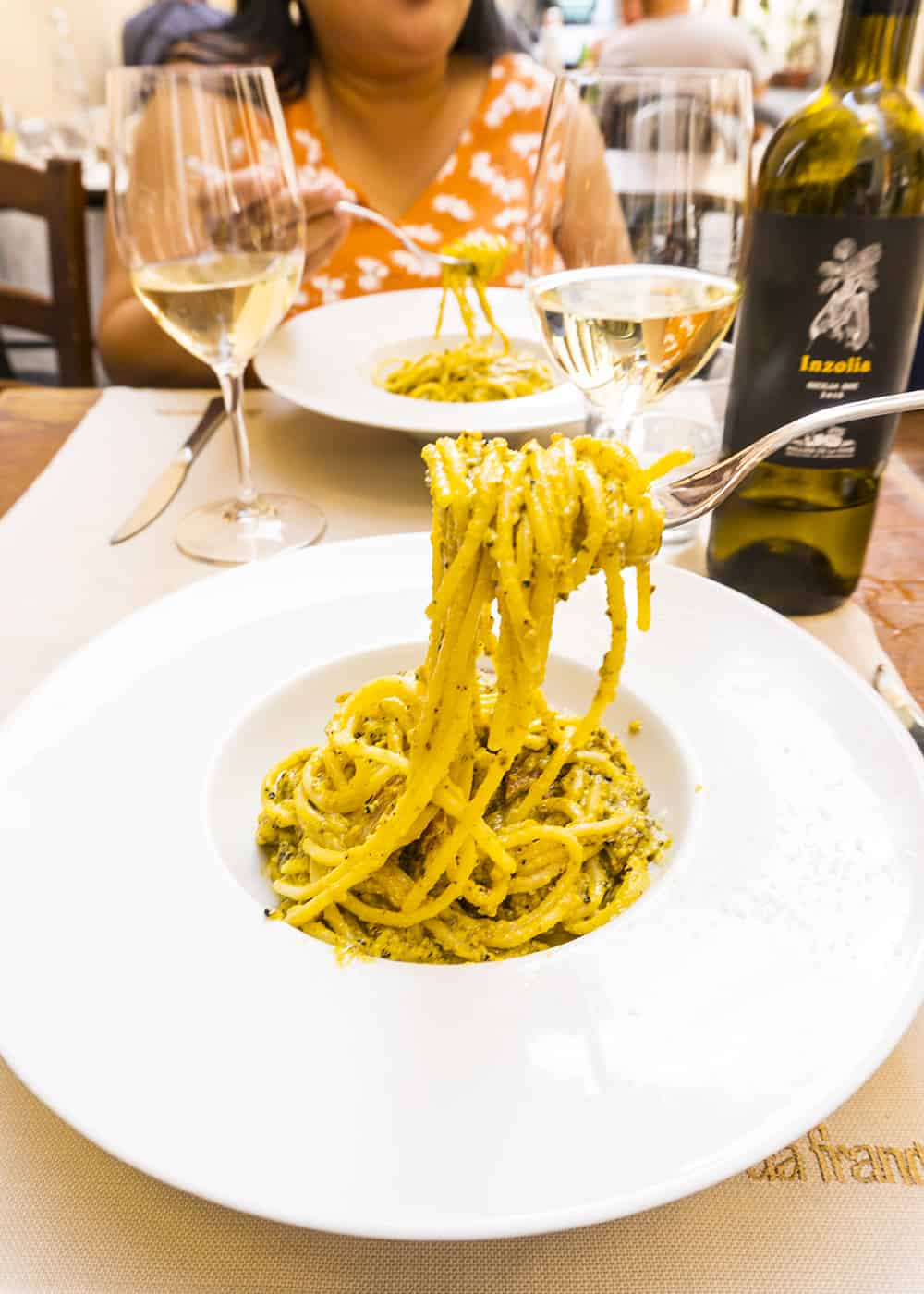 We’re going to start this list of food in Italy with all the different kinds of pasta that you have to eat. Spaghetti carbonara is made with spaghetti noodles, egg, Parmigiano cheese, and bacon (or guanciale). I’ve eaten this plenty in Italian restaurants here in America and made it home but this was my top thing to eat in Rome. Sometimes spaghetti carbonara will come with a little truffle oil too! 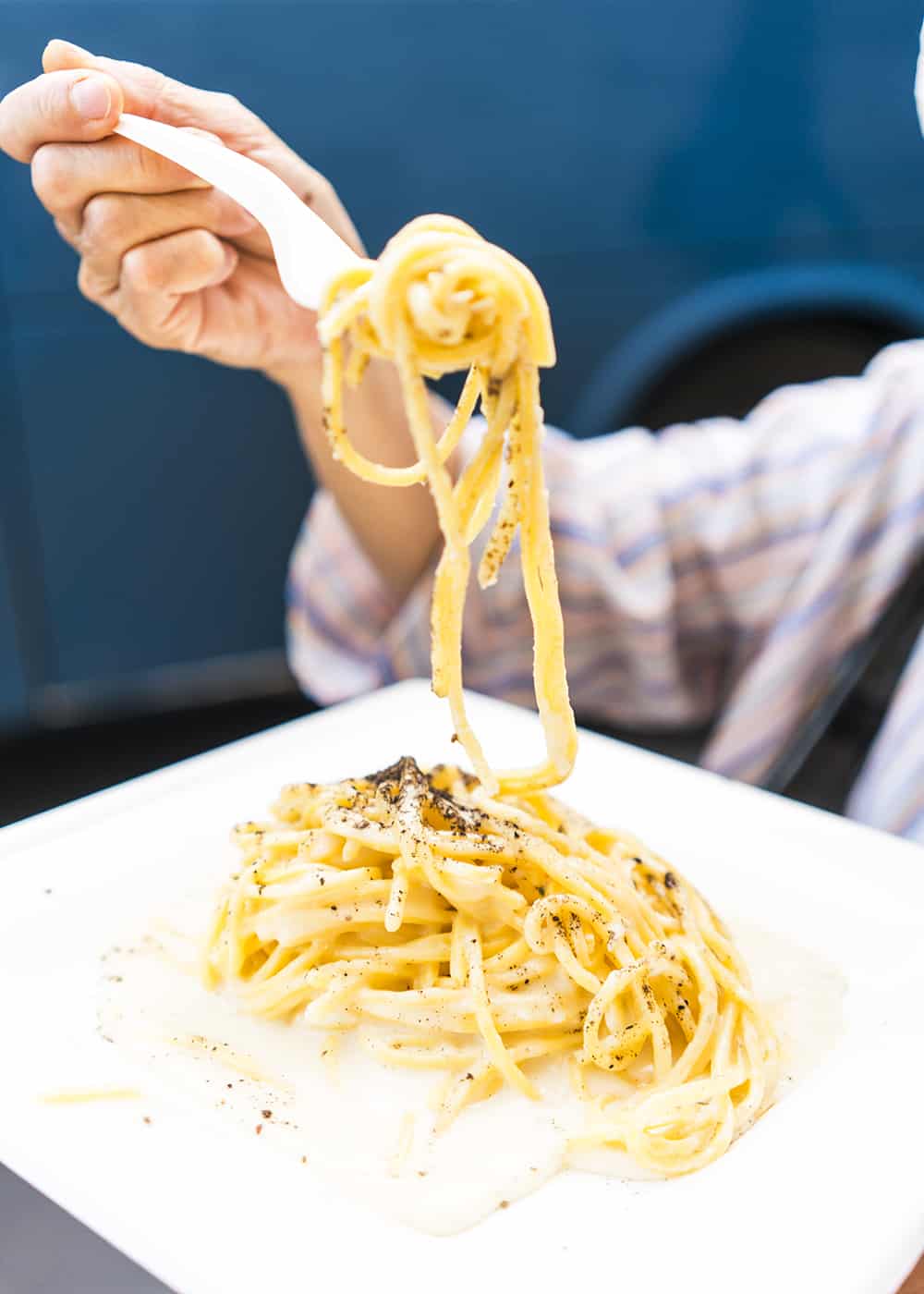 Pecorino cheese and black pepper – nothing else and that’s the true beauty of cacio e pepe. Almost every restaurant serves in Rome and there’s even a restaurant that’s named Cacio e Pepe in Rome. 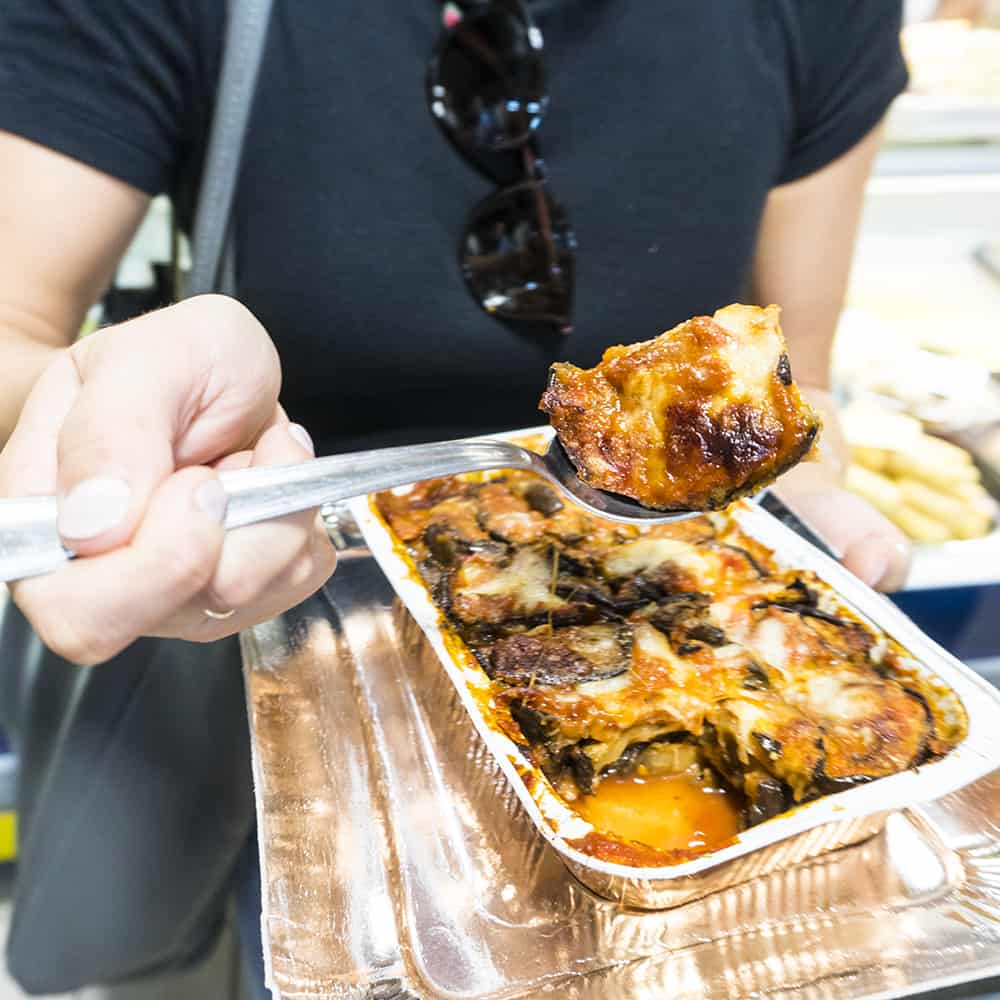 Eggplant parmesan is one of the most classic Italian dishes – also called Melanzane alla Parmigiana in Italy. The trick is to find it made by a local grandma in a local food market.

Tagliatelle and tagliolini are both traditional types of pasta from the Emilia-Romagna and Marche regions of northern Italy. These flat long ribbons are familiar to fettuccine that’s usually served with seafood like shrimp. . 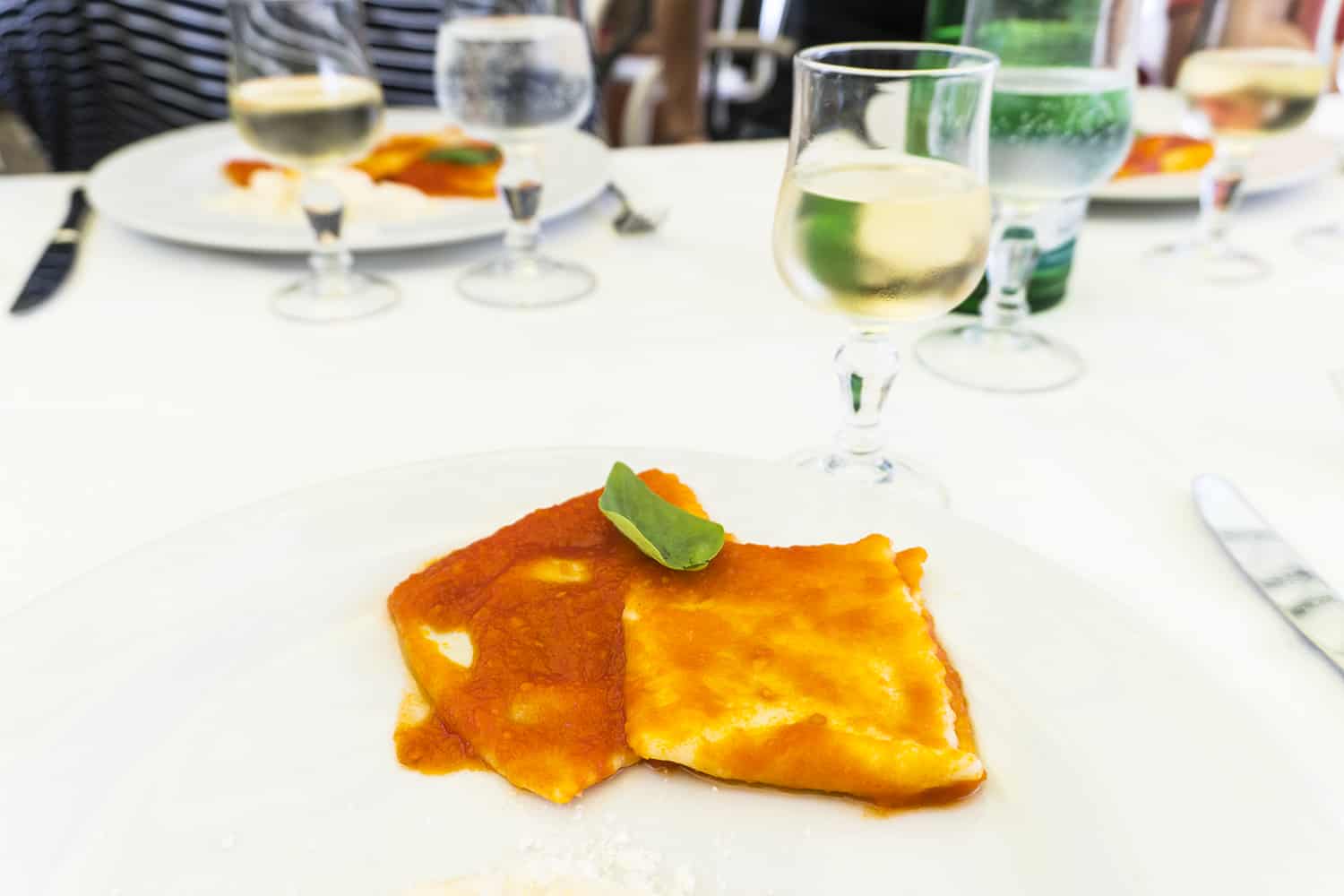 Eat a lot of pasta dishes. I took a cooking class in Rome on making ravioli with a local Italian chef. We learned everything from making the dough from scratch, mixing the filling, rolling out the door, cooking the pasta, and the pasta sauce. The chef yelled at me constantly to cook the ravioli, “al dente, al dente.” I failed but it still tasted amazing anyway.

Tortellini are ring-shaped pasta originally from the Italian region of Emilia. According to local legend in Emilia-Romagna, Italy, the birthplace of tortellini, the pasta’s navel shape was inspired by the indescribable beauty of Venus’s belly button. 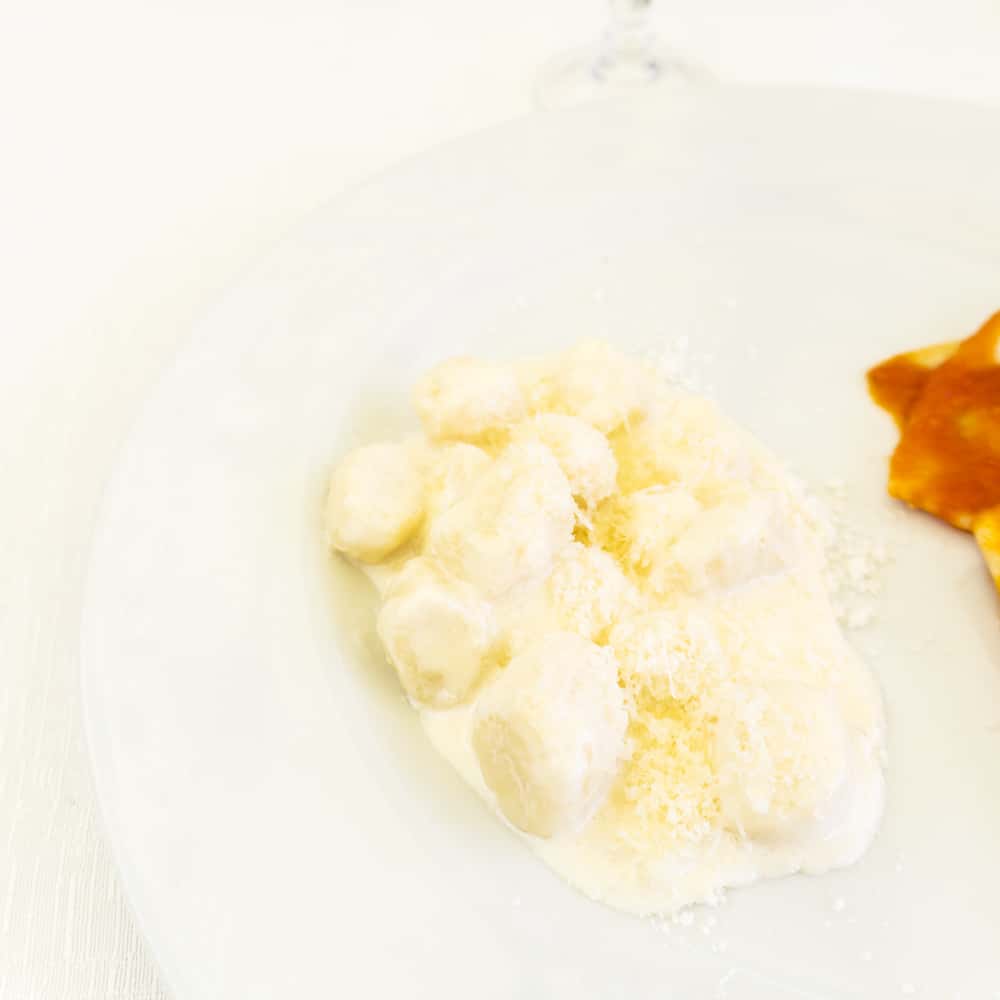 Italian dumplings made with just a couple of ingredients – potato, flour, egg, and sometimes parmesan cheese.

Orecchiette from Puglia in Southern Italy is named for its shape that resembles a small ear. orecchiette is versatile and can be cooked with sausage, vegetables, or even bolognese with pecorino romano.

Commonly know as lasagna in the United States, lasagna is, of course, a popular dish in Italy but it was actually didn’t originate in Italy but Ancient Greece. Lasagna in Emilia-Romagna is made with meaty Bolognese sauce and creamy béchamel sauce between layers of pasta. 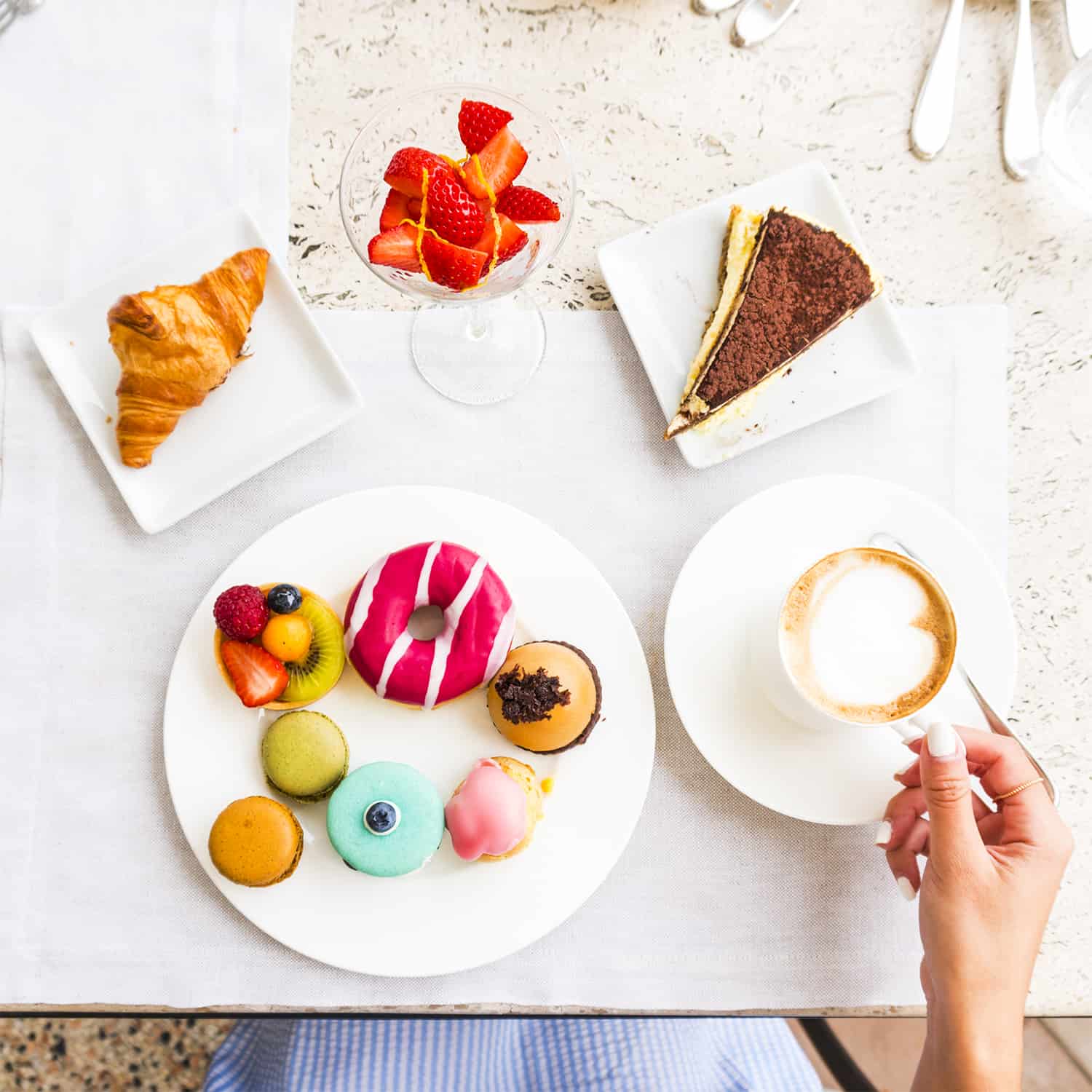 An obvious choice but tiramisu is what the Italians are known for and when in Rome, you have to eat tiramisu. 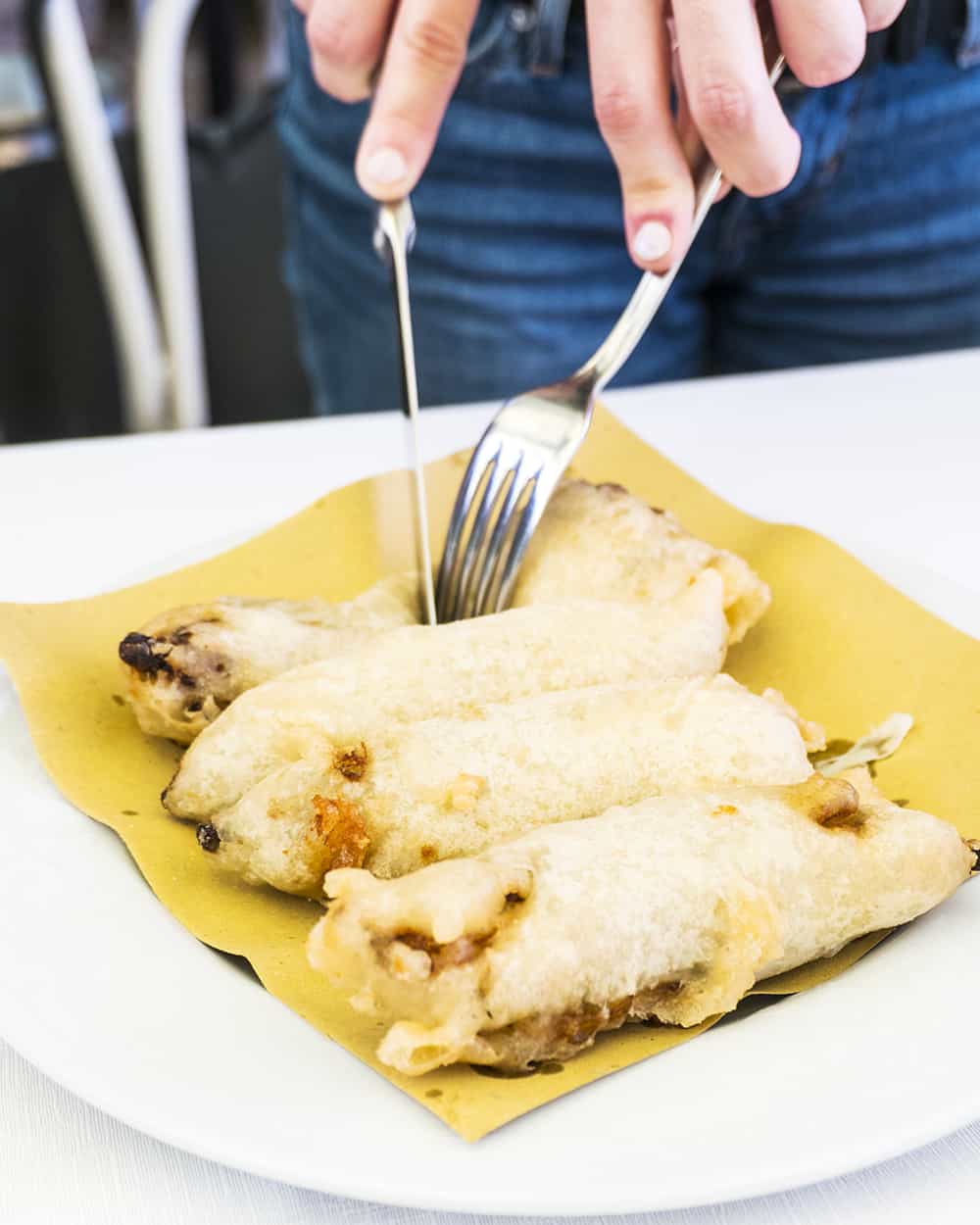 Zucchini flowers are a traditional appetizer and popular antipasto in Italian cuisine. I’ve had them coated with a light batter so it was interesting to have them with a chewy texture and stuffed with mozzarella. 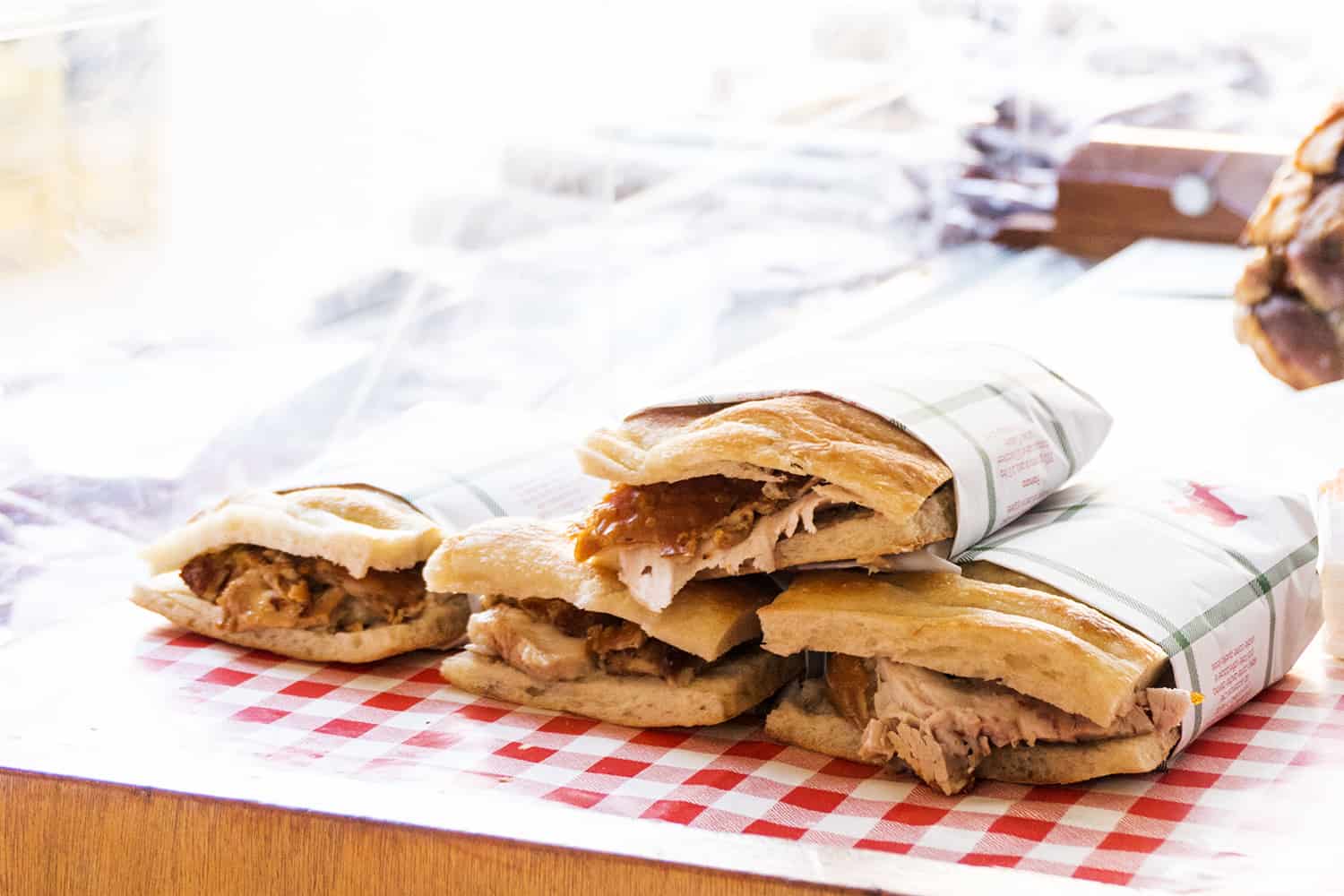 The classic Italian porchetta is the savory, fatty, and moist boneless pork roast. The meat is tender and flavorful and if you get a piece of the skin, my favorite part, it’s crispy and salty.

Ossobuco is Italian for “bone with a hole” – I’ve made ossobuco at home before. The cooking method is the Italian cooking style – low and slow but it’s so good. Cross-cut veal shanks are braised with vegetables, white wine, and broth, and then served with risotto or polenta.

Drink lots of wine in Rome. Water costs money anyway in the Rome restaurants (the restaurants don’t offer tap water so it’s not free), so you might as well. Pick up any bottle of Italian wine and look for DOCG, DOC, and IGT.

Denominazione di Origine Controllata (DOC): DOC wines are much more commonly found. The rules governing quality and authenticity are still very strict, but they’re a little more generous than those for DOCG status. 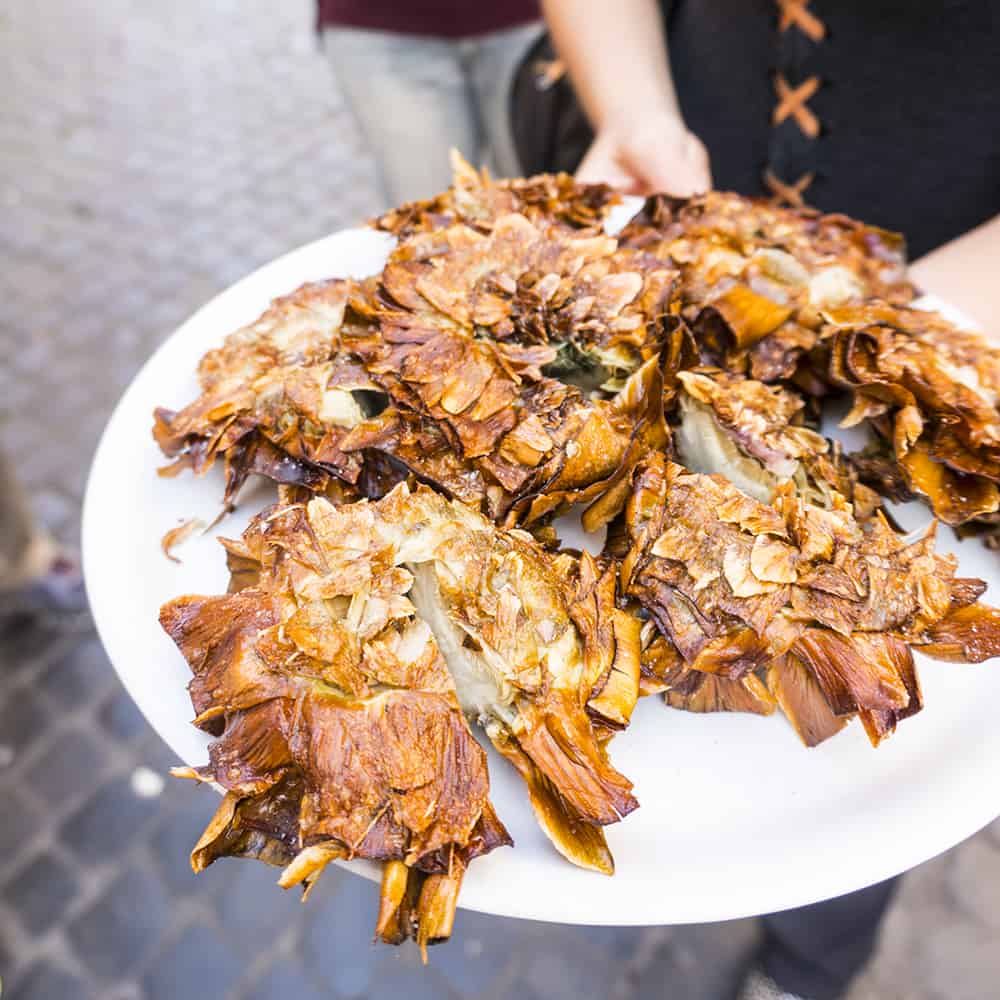 Carciofi alla giudìa is one of the best-known dishes of Roman Jewish cuisine. This was my first time having an artichoke entirely deep-fried, delicious! 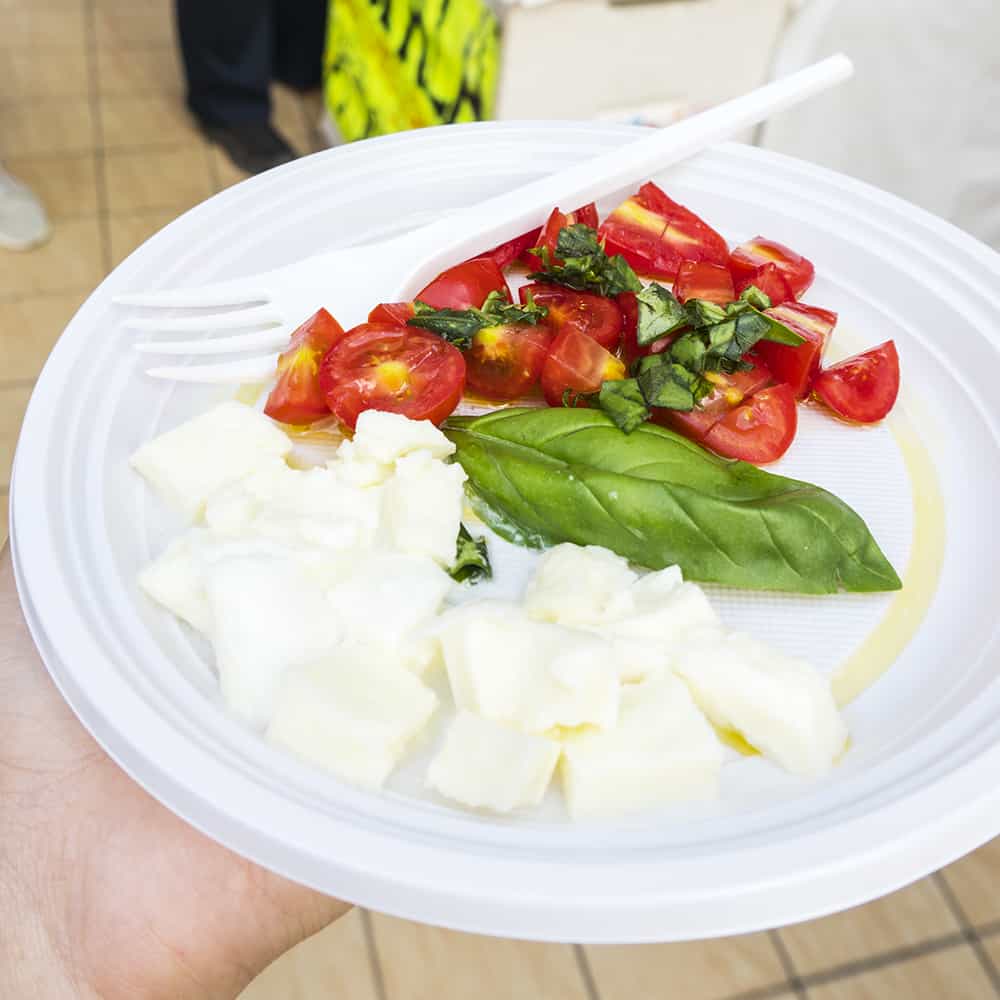 Fresh mozzarella is everywhere in Rome – pizza, salads, sandwiches, and served just by itself with a drizzle of olive oil. You can find fresh mozzarella at local markets like the Trionfale Market. If you do buy fresh mozzarella, don’t refrigerate it for the first 3 days because it’s very milky. 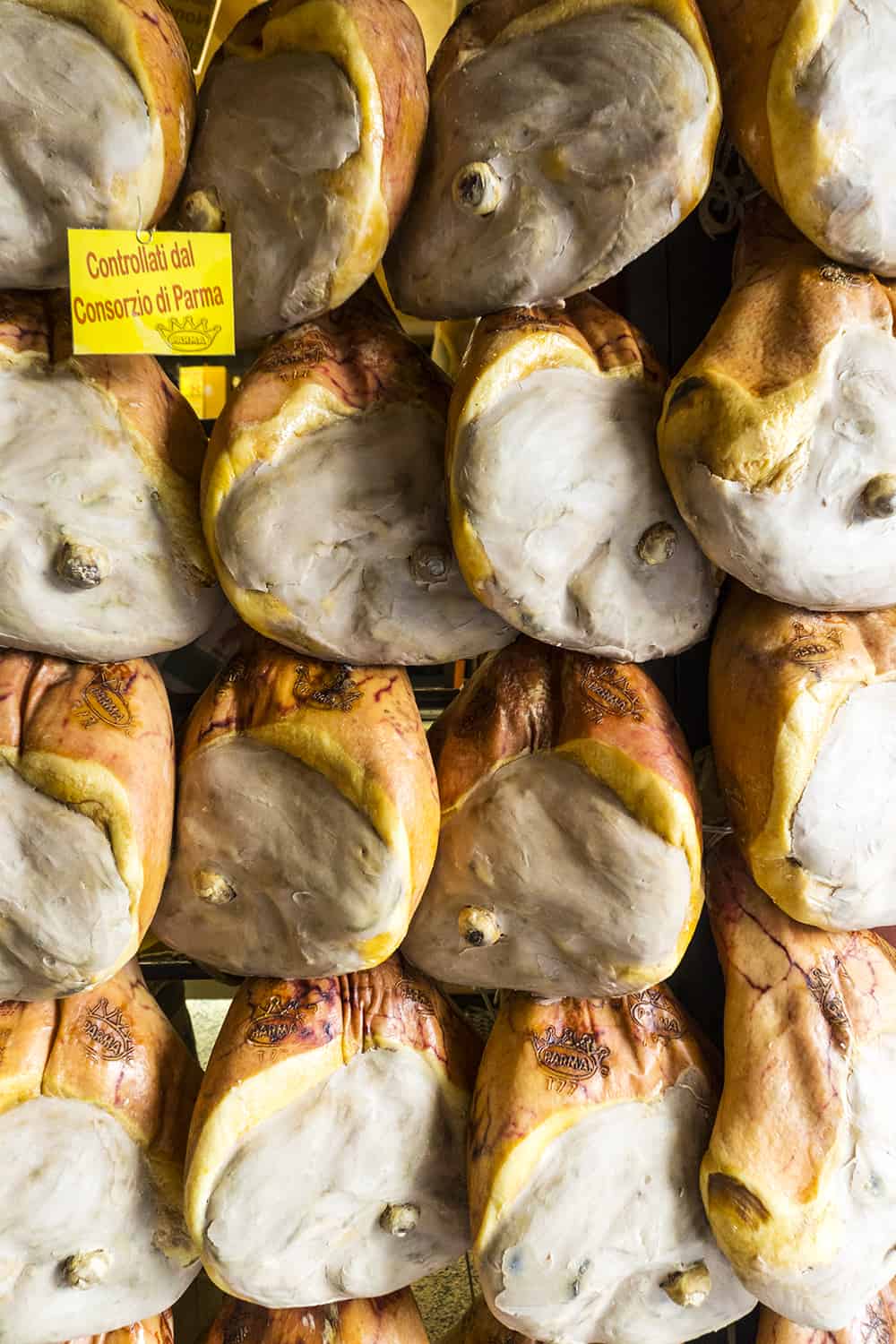 I encourage you to step into any meat shop (Paciotti Salumeria pictured above) and ask to taste the prosciutto di parma. Prosciutto di Parma is cured for a minimum of 12 months.

I couldn’t make this food in Italy list without at least including one protein-focused dish of Italy. Bistecca alla Fiorentina or Florentine T-bone steak from Tuscany is an Italian steak that is typically from Chianina cattle — an ancient Tuscan breed known for its prized and tasty meat — seasoned with local spices, and grilled over red-hot coals. 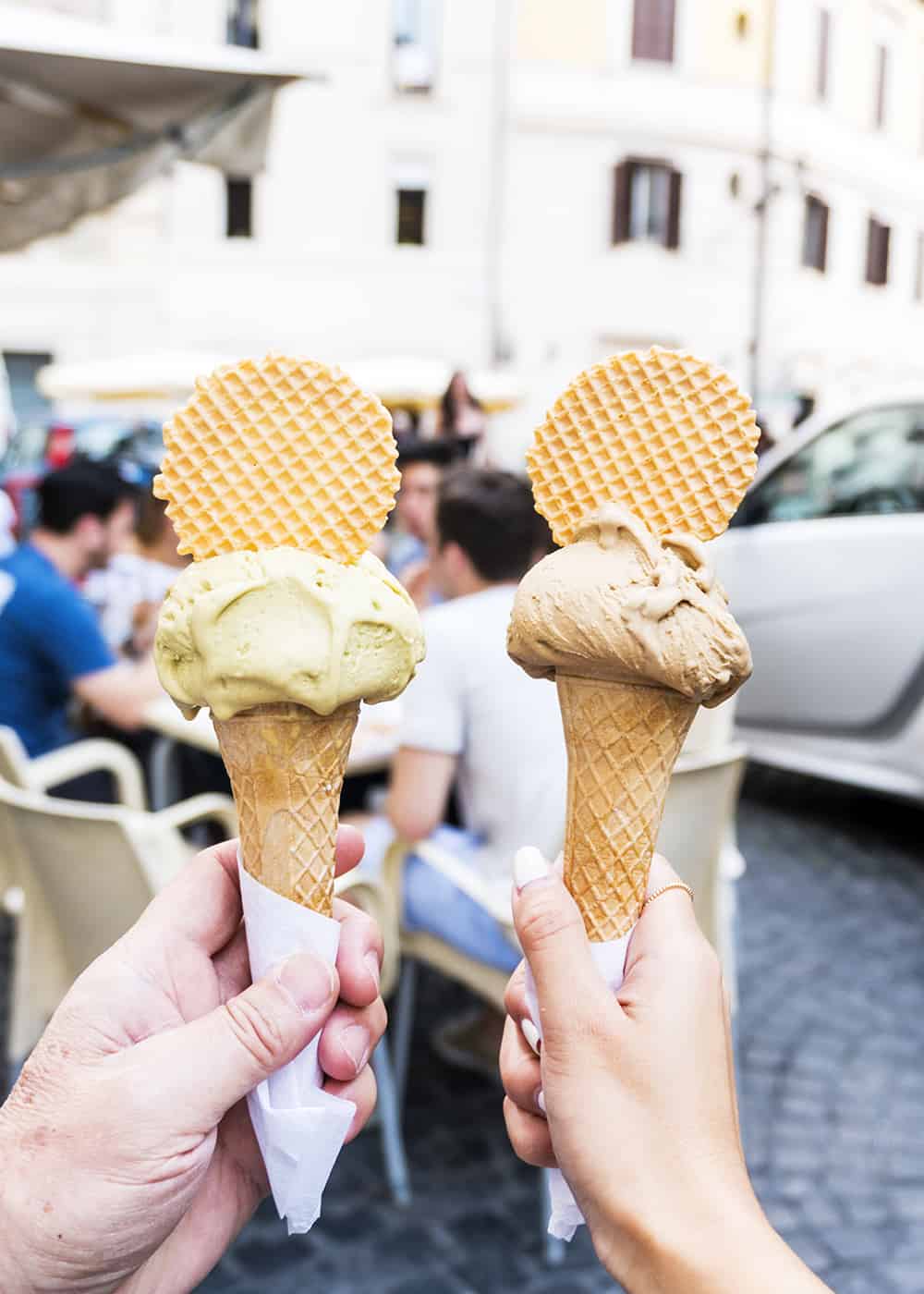 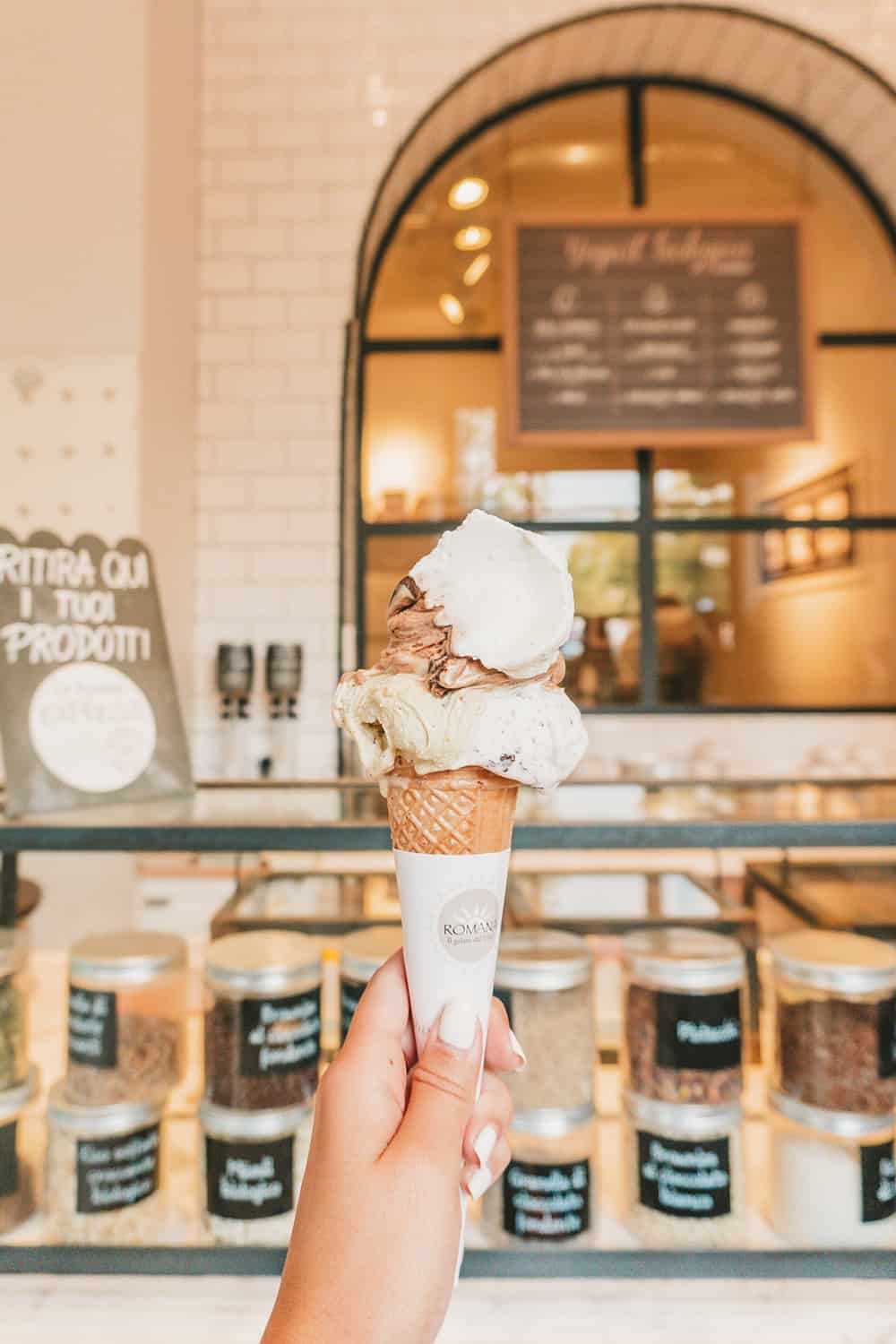 When in Rome, you must have gelato every single day. My favorite gelato shop in Rome was Gelateria La Romana. Order the hazelnut and pistachio at least once when you’re in Italy because the nuts are from the region. Most of the pistachio in America is fake because pistachios are very expensive. 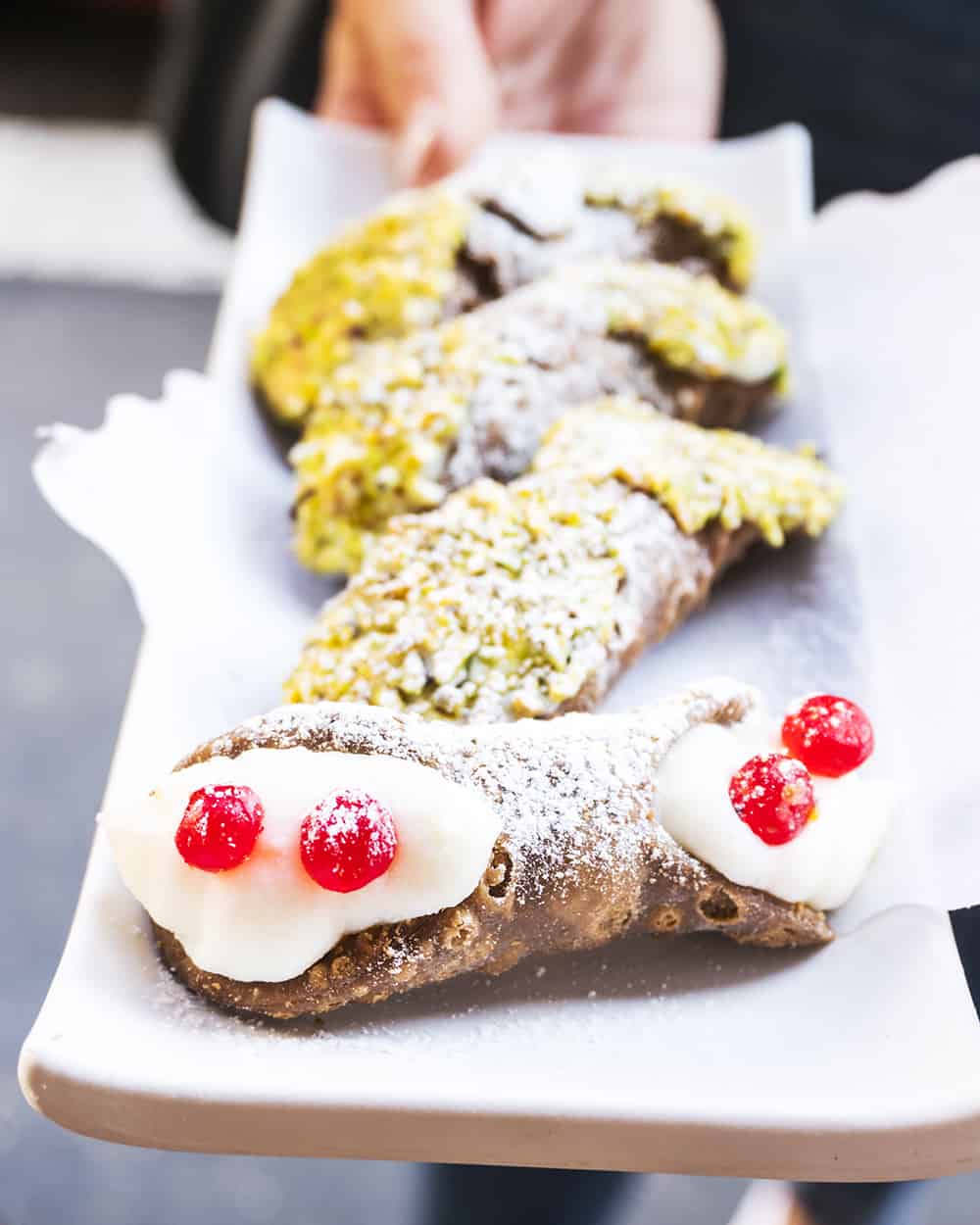 Pro tip: Ask for cannoli to be piped fresh with ricotta so you don’t get a soggy one out of the bakery case. 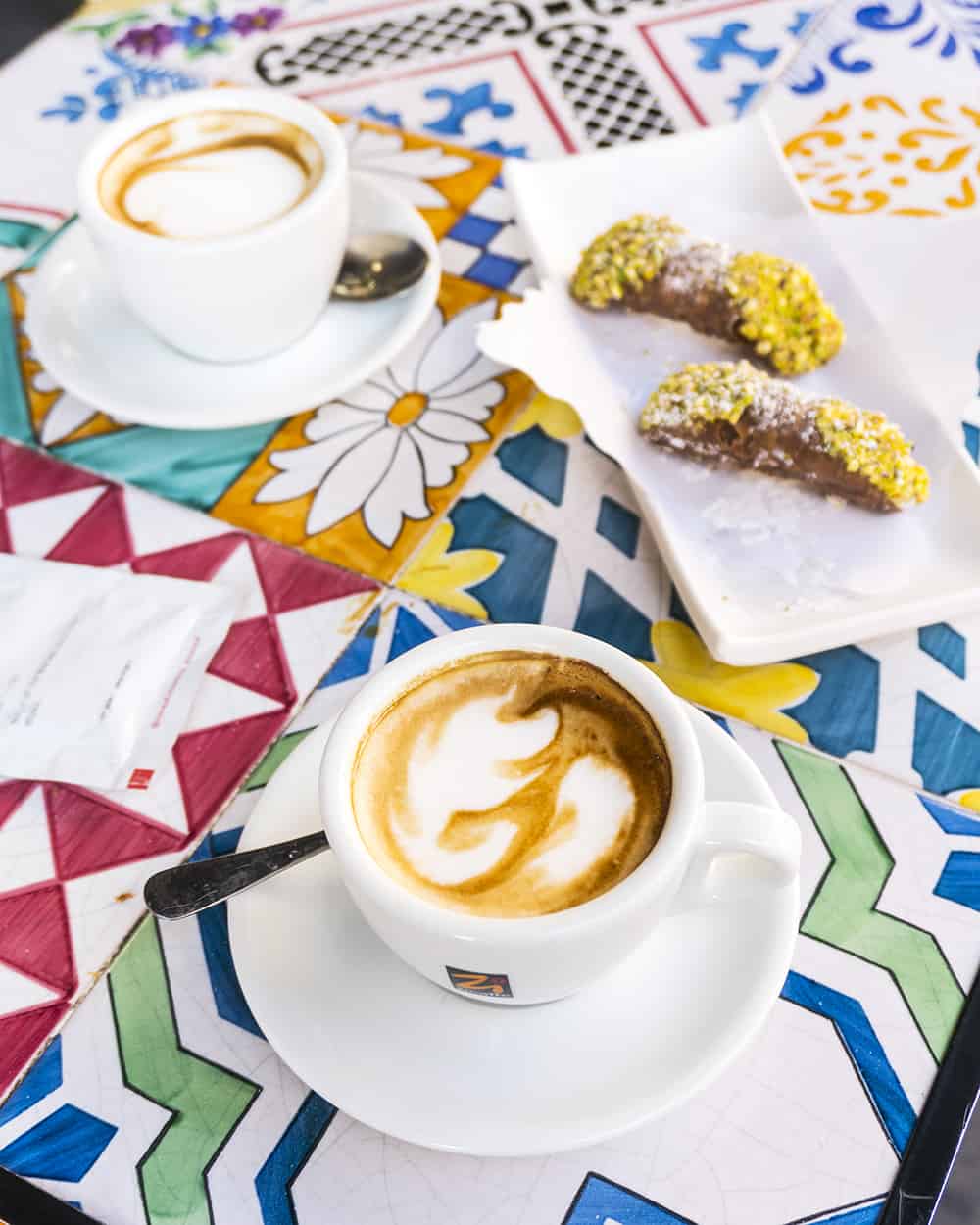 I learned in Rome that Italians always take their coffee hot and never iced so don’t ask for an iced macchiato!

Veal alla Milanese is a popular Italian dish from Milan made with a tender veal cutlet coated in breadcrumbs and then fried in butter. 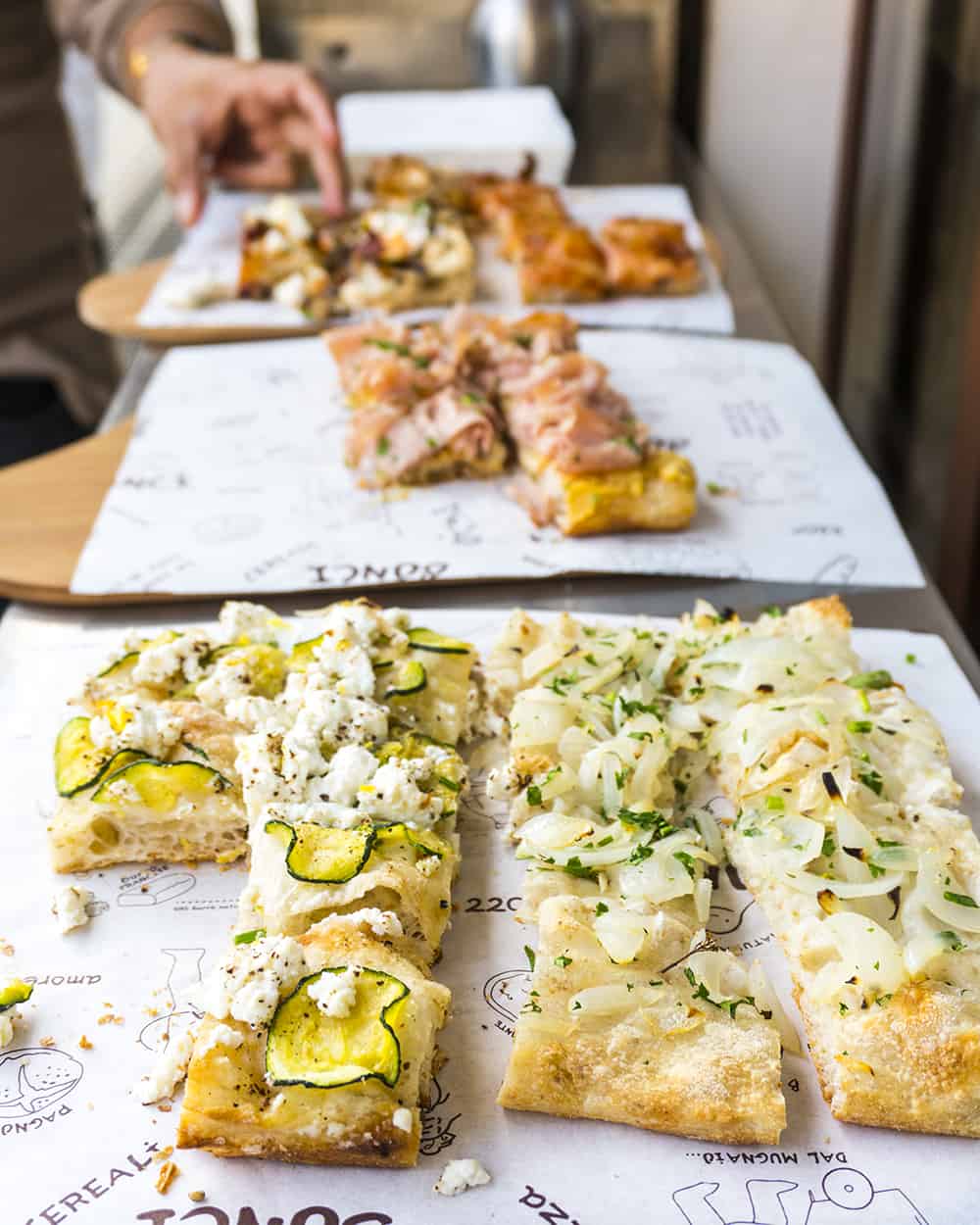 As you can imagine, there are a TON of pizzerias in Italy. Two best pizza spots in Rome are Roscioli (I went here 3 times in one day), and Bonci. Bonci is called the Michaelangelo of pizza by Vogue pizza. You’ll find pizza margherita almost everywhere in Italy because it has the colors of the true Italian flag! This typical Neapolitan pizza made with San Marzano tomatoes, mozzarella cheese, fresh basil, salt, and extra-virgin olive oil.

Fun fact: In Rome, pizza is cut by scissors and weighed because back in the day in Naples, pizza carts would weigh your coins to the equal amount of pizza.

If you get a chance to make a trip to Sicily, Italy, eat all the Sicilian pizza.

Focaccia is one of the most famous Italian flatbreads that’s from Liguria in north-west Italy. Made with just flour, water, and olive oil, it’s light and airy. Focaccia is then topped with coarse salt, rosemary, cherry tomatoes, onion, and other veggies.

If you’re in Umbria, look for torta al testo con i ciccioli, a focaccia bread baked on a stone disk and stuffed with little pieces of pork. 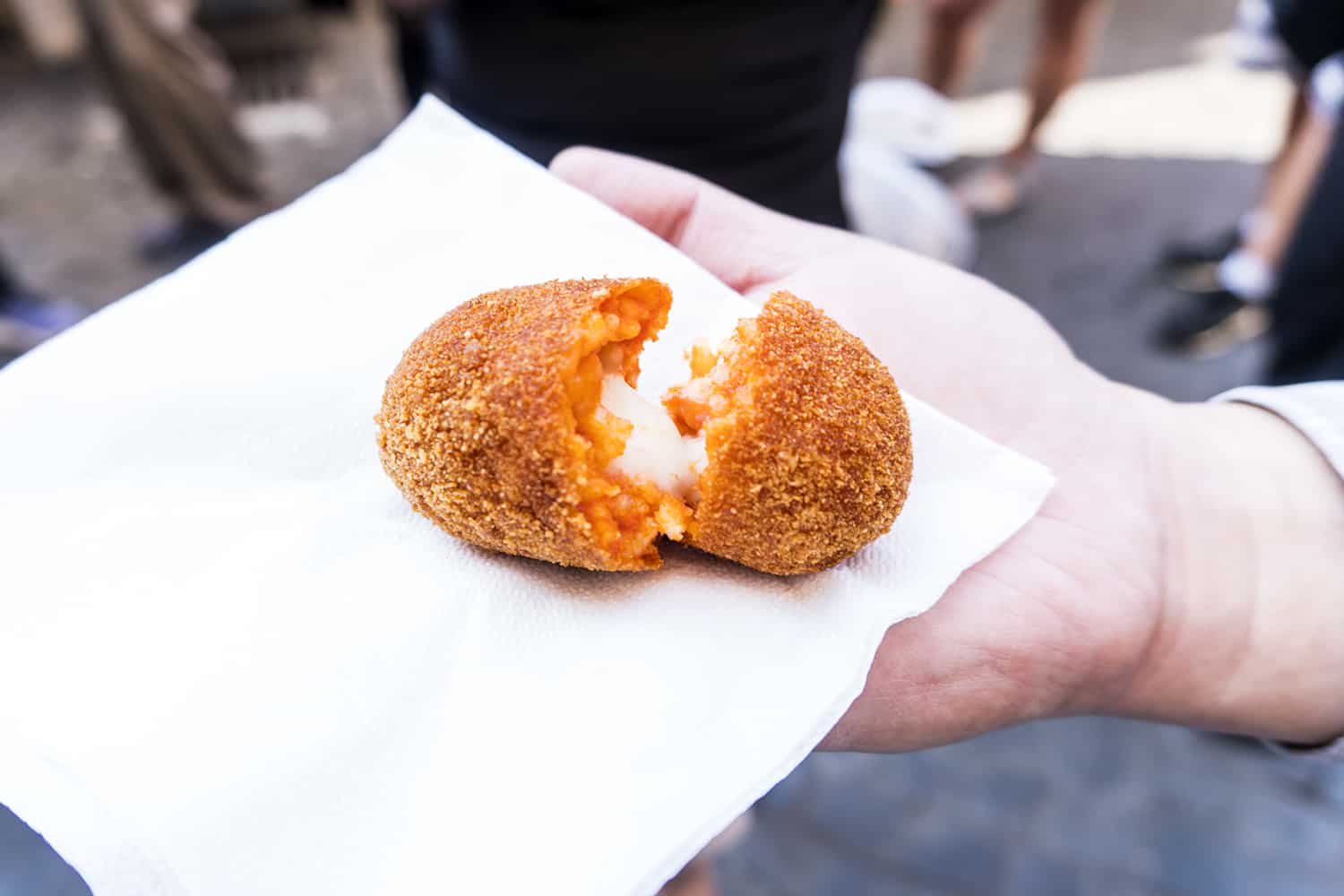 Suppli is street food in Italy that are basically rice balls filled with mozzarella and tomato sauce and then fried. It shouldn’t cost more than €2 or else you’re overpaying. Similar to arancini.

SEE ALSO: 9 Top Things To Do In Bologna, Italy

VAT Refund 101: How To Get Money Back When Shopping In Europe

Where To Stay In Rome: Rome Cavalieri

17 Must Eat Foods At Christmas Markets in Germany