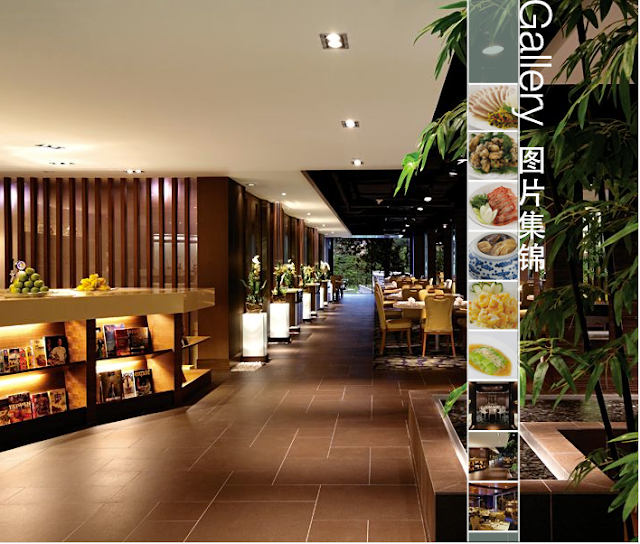 Expanding from a shop in Taipei’s back alley to the business districts, and then from Taipei to Beijing and Singapore, Shin Yeh, deeply rooted in Taiwanese cuisine, has inherited generations of traditions. Nurturing insistance, innovation, and inclusiveness, Shin Yeh has envolved into a unique and international gourmet brand. In 1977, a businesswoman with a dream set up a small restaurant in a Taipei back alley. Mrs Lee Xiu Ying began with only 11 tables and thus Shin Yeh was found. [Photo source: ShinYeh.com] 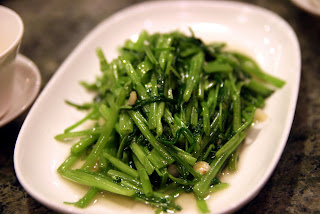 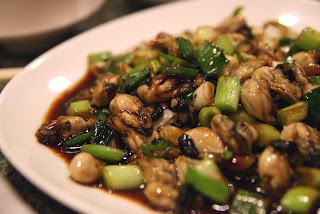 Sauteed oysters with chives.
When I come back to Taiwan, I always eat seafood. It’s incredibly fresh here, especially the oysters. The oysters are sometimes a tad on the smaller side [unlike the Texas oysters] but they are much more tender. Seasoned with oyster sauce, I think. 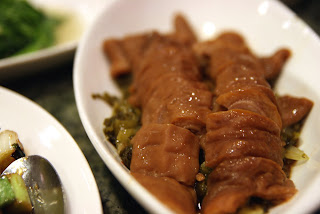 卤味肥肠 Pig’s intestine with preserved vegetables in soy sauce.
House specialty. Pig intestine is a finicky thing to cook. It has a collegen type texture, which is impossible to chew if it’s not cooked correctly. Shin Yeh’s pig intestine was very tender.

紅燒魚翅羹 Taiwan-style double boiled Shark’s fin casserole.
A yummy casserole soup filled with seafood/meat favorites: abalone, scallops, sea cucumber, pig intestine, and the prized shark fin. Sea cucumber, shark fin, and other asian delicacies have very little flavor of their own. Their appeal lies more in their texture and their ability to absorb flavors from other soup ingredients and also of the the simple fact of their expensive and “rarity”.
Shark fin is very, very expensive. I won’t get into the controversy over the practice of shark finning.
[Photo source: ShinYeh.com] 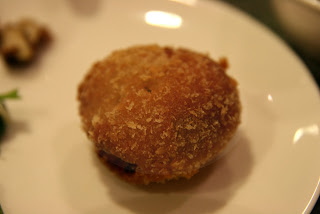 金錢蝦餅 Crisp-fried Shrimp Balls.
Shrimp rolled into a ball, covered with flour and panko bread crumbs and fried. Very light and not oily at all.

Shin Yeh claims that they are attentive to details and and a composer of gourmet food. I can definitely tell that the chefs at Shin Yeh do focus on the details and specifications of their cuisine. Each dish is created artistically and the waitresses/waiters personally divide and serve each dish to each person at your table. This restaurant has caught the nostalgic Taiwanese cuisine with a classy and high-end atmosphere. They change out your plates/bowls after each dish and they keep the teapot over a candle to keep it steaming hot. You also receive a complimentary dish of Taiwanese style mochi at the end of your meal.