“Through my restaurant and now this cookbook, I hope to teach people the same reverence that the Japanese have for their cuisine. These people are serious about it. And because of that, I’m serious about it.” Tyson Cole, owner and chef of Uchi and Uchiko

Uchi, The Cookbook, is written by Tyson Cole and Jessica Dupuy.

The book itself is beautiful. Hardback with a fish scale design encompassing 268 pages covering how Tyson Cole decided he wanted to become a sushi chef, foreword from Lance Armstrong, the significance behind the design of Uchi and Uchiko, the food food formula of Uchi, Japanese food culture, and beautiful pictures & recipes of their popular appetizers, entrees, sushi rolls, and desserts.

The book begins with Tyson Cole’s journey into becoming a sushi chef. If I were to describe his journey in one word, it would be ‘inspiring’. It’s hard to believe that one who hated sushi initially would someday become one of the most brilliant chefs in America, owning not just one, but two award winning sushi restaurants.

When people think of Austin, they don’t think of high quality sushi. More along the lines of southern cuisine and good ol’ barbeque. Even Lance Armstrong says so in the foreword. But one visit to Uchi or Uchiko will prove otherwise and will make you come back for more.
This picture was taken at the VIP book signing at Uchiko for Uchi The Cookbook on March 1st where guests could get their book signed by Tyson Cole.
About the authors of Uchi, The Cookbook.
Tyson Cole, 40, is a passionate student of the Japanese tradition. Cole became fascinated with sushi in his early twenties while working at an Austin Japanese restaurant. He dedicated himself to learning every aspect of the cuisine. Demonstrating skill and dexterity with the knife, he quickly worked his way onto the sushi line at Austin’s top sushi restaurant, Musashino, where he completed an intensive traditional apprenticeship under owner Takehiko Fuse. Fuse challenged him to learn the Japanese language, which helped Cole learn more about the cuisine. He later trained at Bond Street, one of the busiest sushi restaurants in New York City. In his last year at Musashino, Cole began experimenting with new ideas about flavors, influences and ingredients, running the restaurant in Fuse’s absence.
Jessica Dupuy is a freelance writer who has written for National Geographic Traveler, Texas Monthly, Texas Highways, and Fodor’s Travel Publications. Dupuy’s favorite writing pursuits are about the things she loves most in life: food, travel, and the outdoors. Having received a bachelor’s degree from Trinity University and a Master’s degree in Journalism from Northwestern University’s Medill School of Journalism, Dupuy has also spent time living Dublin, Ireland and Strasbourg, France; experiences that piqued her interest in writing. Dupuy lives in Austin with her husband, Myers, her son, Gus, and two Duck Tolling retrievers, Finn and Ginger. She enjoys cooking, traveling, triathlons, and fly-fishing.

I picked up two copies of Uchi The Cookbook at the launch event. Beware, the book is heavy! Good thing I brought my big purse that night.

Uchiko was packed that night with friends, family, and fans. It was exciting to be able to meet Tyson Cole, Paul Qui, Phillip Speer, and Masazumi Saio. They have to be some of the most down to earth chefs I’ve met.

I also learned that night that they all call Uchiko, ‘Ko’ for short. Coincidentally, my last name is ‘Ko’, as you guys probably have already guessed. This blog is after all named A Taste of Koko. 🙂 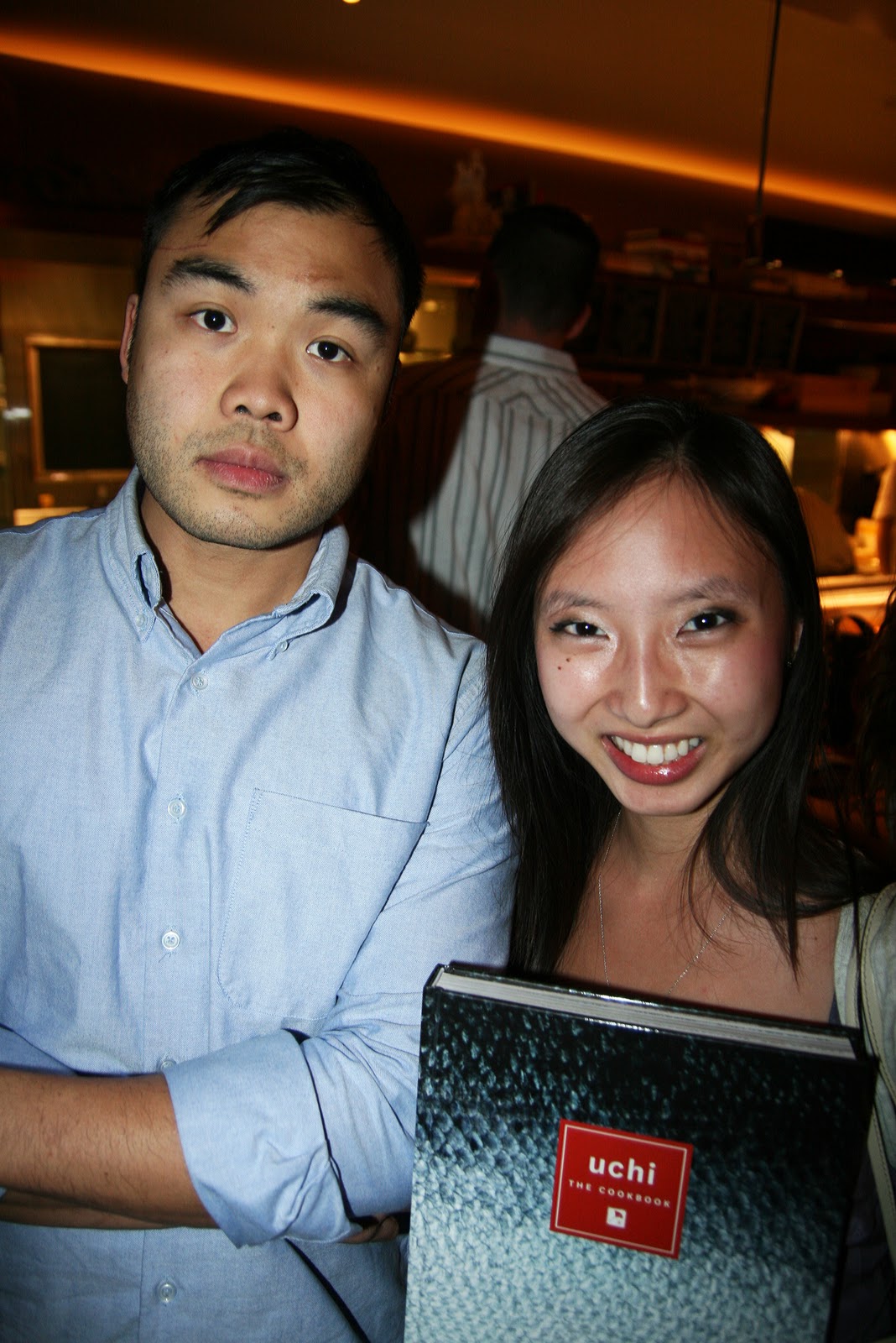 (From left to right) Paul Qui is the Executive Chef of Uchiko and owner of East Side King. He was also a finalist for Hottest Chef in Austin 2011 at Eater.com. Philip Speer is the Executive Pastry Chef of Uchi and Uchiko. Check out his blog at www.phillipspeer.com. Masazumi Saio is the head sushi chef of Uchi.

Among the long line to get our books signed by Tyson Cole, I was lucky enough to be standing right behind Rebecca! We’ve tweeted to each other online but have never met in person. I didn’t know it was her until when she introduced herself to Jessica Dupuy.

She won Best Blog for Entertaining Tips in the Austin Blogger Awards 2010.

As if meeting the chefs who serve the food at Uchi and Uchiko wasn’t enough, food samples featured in the book were passed out throughout the night. My boyfriend and I must have devoured almost $200 worth of food that night.

We spent a good deal of time that night with head sushi chef, Masazumi Saio. One of the best kept secrets of Japanese restaurants is to eat at the sushi bar. Not only is it a good way to get to know the sushi chefs who make your food, but to watch how they make it. The technique is an art in itself.

I learned what went into each food sample from Masa. The way Masa handled and sliced the fish was enlightening. Everything was down to the details. To how the fish was arranged on the plate to placing minutely sliced Thai chili pieces.

I can’t wait to finish reading Uchi Cookbook, it’s a bible of modern Japanese cuisine, technique and ingredients. And I can’t wait to start trying out the recipes!
I can share more with you in what’s in the cookbook but I think I’ll just go ahead and let you take a look for yourself!
Get your copy of Uchi The Cookbook at www.uchicookbook.com

About Uchi
Opened in 2003, Uchi showcases the culinary talents of executive chef and sushi master Tyson Cole. His exciting menu expands on the Japanese tradition with new flavors and innovative food combinations. Recently named the best restaurant in Austin by The Austin Chronicle, “Best Food” in Austin by The Fearless Critics Guide and “Number One Restaurant in Austin” by the Zagat Guide.

************
If you missed out at the VIP booksigning, Edible Austin and Book People are teaming up to host Chef Tyson Cole’s cookbook release party at Book People on March 10th at 6:30pm.

Enjoy a sampling of bites prepared straight from the book’s recipes from 6:30–7pm followed by a panel discussion with Chefs Tyson Cole , Paul Qui, Philip Speer and Uchi the Cookbook co-author Jessica Dupuy.
The event will be moderated by food writer MM Pack and Edible Austin publisher, Marla Camp.
Sushi master Tyson Cole will be put in the hot seat and ready to discuss all the ingredients it takes to make a cookbook!