14 Crazy Things To Eat At Sai Kung In Hong Kong

Sai Kung is the second largest district in Hong Kong. This area is known of its pristine beaches and quiet living. It remains partly urbanized, many people describe Sai Kung as the “last back garden” of Hong Kong. As a former fishing village, Sai Kung is a mecca for seafood lovers, locals and tourists.

The Hong Kong University of Science and Technology is located in Clear Water Bay, Sai Kung. The backyard of the University is actually the bay, which is just breathtaking. HKUST is the only science and technology research university in Hong Kong, and the only one to offer an all-PhD faculty.

The university also has a dim sum restaurant in one of their building. The food is very, very good!

What To Eat At Sai Kung

Coincidentally, the Chinese characters for Sai Kung is also the Vietnamese characters for Saigon. It is also pronounced the same way in Chinese.
The main pull here is the first class seafood, healed directly off boats on the seafront promenade and whisked away to the rows of al-fresco seafood restaurants. The promenade is perfect for strolling in the sun and at night which offers view over the bay. You can also take a boat out to the different islands. Thanks to our friend Ellery Kwok, we were able to enjoy the ride out to sea, see different islands, and go swimming. 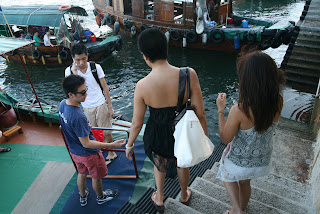 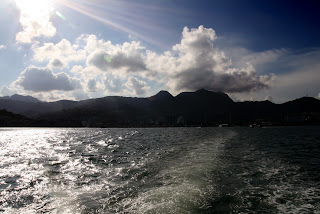 The water here was perfect for the hot humid weather in Hong Kong. The bulletin board does warn of dangerous marine life in this area such as sharks and sea urchin but the beach is well monitored. There’s a lifeguard on the beach and there is one on a boat out in the water. They also net off a safe swimming area.

At night, vendors line up and down the promenade selling dried fish, squid strips, shrimp and other seafood favorites. If you look down to the water, seafood boats bump against the promenade selling seafood they caught just hours ago. Pick the creature of your choice and the fishermen will bag it and send it right up to you in a fishing net. Payment is dropped back into the fishing net. You take your squirming loot to the restaurants that go all way down the promenade, where they’ll cook it for you. You can also buy your seafood from the tanks in front of the restaurant, but isn’t it more fun to be able to pick your own food? Livin’ it Bourdain style.

If picking seafood right off a boat doesn’t float your er… boat then you can head straight to the restaurants and pick your loot from the tanks. Instead of a flimsy menu, you can point at what you want and the guy will bag it up for and send it to the kitchen. I saw creatures that I never saw before and creatures of abnormal sizes. Who knows what else is in these waters…

I thought these were extinct?! Apparently not. They are among the world’s oldest creatures. Estimated to be able 300 million years old. They are entirely inedible. With a heavy coat of armor, they have few predators, except for humans…
Unlike humans, horseshoe crab blood runs blue because of the lack of hemoglobin in the blood and the presence of copper. Their blood is very valuable. A quart runs for about $15000. It is the only known substance to effectively detect impurities.

There are many different color species of the Mantis shrimp. I have never seen this before in the States. The moment I saw this foreign creature, I pointed it and told Ellery that I want to eat it.
The mantis shrimp has remarkable good vision. It can perceive both polarized light and hyperspectral color vision.
The ones we had were about 8 inches. In Cantonese cuisine, the dish is known as “pissing shrimp” because of their tendency to shoot a jet of water when picked up. They fried it and sprinkle on a salty cajun spice. You have to peel off the shell just like a shrimp but the meat is very similar to lobster. This was my favorite dish of all. Very, very addicting. I wanted to take a bag of it togo and snack on.

This is the same breed as before but I believe these are the females. They have a bright red hue on their backs, which are the eggs. However, unlike fish roe, their eggs do not taste as good. They are significantly larger than the males and more expensive. Around $14US each before cooking. A local was nice enough to tell us to get the smaller ones, since they taste better. According to the salesperson, the mantis shrimp are placed in secluded water bottles so they don’t fight with each other.

Considered a delicacy due to their delicate shells, they are difficult to harvest commercially and find at fish markets. The meat has the expected texture of a clam, but the sweetness of a lobster. Sautéed with black bean sauce with peppers and onions.

Served with glass vermicelli, light soy sauce, chives, and garlic in its original shell. The seasoning is very light to not mask the flavors of the ocean.

This unusual name of the clam is derived from its ability to dig deep. They have a life expectancy of 146 years, with the oldest of 160 years. Its large, spiny siphon is prized for its savory flavor and crunchy texture. It is also regarded by some as a aphrodisiac.
Geoduck is mostly eaten in a fondue-style, sautéed, or in soups. In Hong Kong, they served it sashimi style over a bed of ice and lettuce.

One of the most prized sea delicacies worldwide. Known as the “filet mignon of the sea”. It looks like a shellfish but it’s actually a marine snail. It is so expensive because it was overfished and had a hard time surviving due to disease and pollution. Abalone is so sensitive they are actually used as a indicating species for water quality testing. The use of scuba gear to obtain these snails is prohibited so divers can only go as far as their breathe will allow them. At least half a dozen people die while diving off the coast of California. Why? Because of the thrill and they’re worth at least $50 each. Two things my Dad told me to eat while I was in Hong Kong: abalone and goose. Unfortunately, they’re $100 each at Sai Kung so I had to pass the opportunity up.

I’ve seen some pretty big ones before but these were byfar the biggest.

Starfish are placed on a skewers and fried.

The second thing that my Dad told me I must eat in Hong Kong. The meat was incredibly tender and juicy. Very similar to duck, especially the skin. It was thin and crispy and oily.

Survival of the fittest

Wow. These fish range from about 4ft to 6ft across. These must be super expensive to buy and could feed 3 families. However, Ellery told me that they’re not for eating. Cantonese people have this traditional where they will buy these fish and take them to the ocean to set them free, in hopes that they [the person] will have a better afterlife or if they have a loved one that is sick, will get better soon.
Even though the fish were in a pretty big tank, I felt sorry for them. They could barely move in there! Especially since they put almost 10 fish in the same tank.
So how expensive could they be right? I’ll set all of them free!
Ellery: “Tens of thousands, of thousands, of thousands, of thousands… Hong Kong dollar”.

Austin-Things To Do In Austin

11 Best Things to Do in Salado TX