The town of Surfside is about local food and local motels. There’s no large commercial hotels like Best Western or La Quinta but little cozy motels like Surfside Motel and local restaurants like Red Snapper Inn. Don’t let the size of these restaurants fool you. Their fish and shellfih is straight from their backyard, the great big ocean. Seafood can’t get any fresher than this.
Red Snapper Inn. 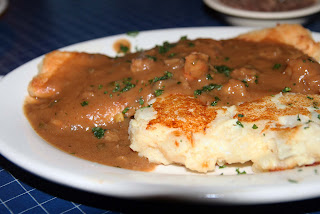 Snapper Portrain.
This was the chef special of the day but I wasn’t impressed. The snapper was indeed very fresh but the sauce was gloopy and bland. The side of potatoes was bland as well.

Fried fillet of snapper and fried shrimp.
The snapper was fresh [obviously] and flaky and the shrimp was sweet and juicy. I highly recommend this dish. Their homemade chips are great too.

Oyster Poor Boy.
The oysters, breaded with cornmeal, were large, fresh, and juicy. I was in heaven. I could live off oyster poor boys. These are probably the largest oysters I’ve seen in a while.
This is by far, the best oyster po boy I’ve had. 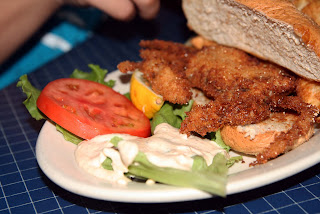 Soft shell crab poor boy.
The soft shell crab was extremely flaky and light. Surprisingly it had a lot of meat too. I highly recommend getting this.
Before leaving Surfside the next day, we came by again for another ones of these.
Best soft shell crab poboy ever.
Ambience: 4; the interior is slightly run down and old.
Food: 6; I would choose fried dishes over the ones with sauces. The poor boys during lunch make it a better deal than the dinner entrees since they can be a bit pricey.
Service: 6; the waitresses/waiters are pretty attentive.
Price: 6.5; the lunch entrees are a better deal than the dinner entrees.
Overall: 5.6; the poor boys for lunch are a good deal but soft shell crab isn’t available everyday since they catch it daily. Get the snapper, it’s what they’re known for.