Pat’s Picks Round 1 – East Side King

0 shares
Hey! My name is Patrick and… I’ll be writing a post now and then which I like to call “Pat’s Picks” which will be about my local Austin finds. Emphasis will be put on cheap, tasty, and friendly.

**NOTE: East Side King 2 is in the middle of changing locations, keep in touch on their website: http://www.eastsidekingaustin.com/ 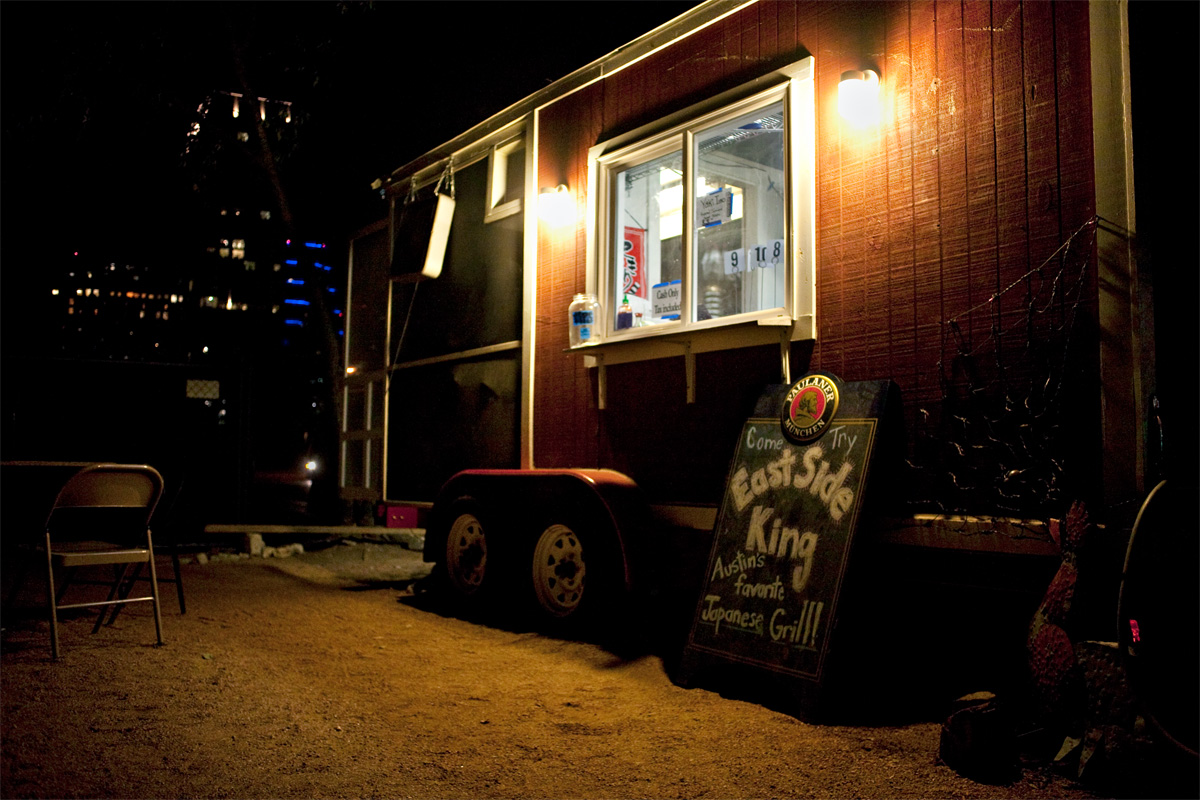 First up is the trailer East Side King 2, located in the patio of Bar 96 in Downtown. This is probably the only place in Texas where you can find legit yakitori, a Japanese version of the shesh-kabab.
———————————————————–
I guess since this is my first post I’ll write a little about myself:
I’m a 3rd year computer science major at UT, and I’m from Houston, Texas. My hobbies inlcude photography, table tennis, and video games. 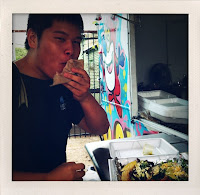 One would think a CS major would be bound to fast food and pizza… but think again! My hero is Anthony Bourdain, I’ve been a fan of his show on the Travel Channel and his books for many years now. If I knew I was going to die the next day, and I could eat anything for my last meal, I would either have fried sweetbreads, or barbacoa tacos with avocado.
———————————————————–
So anyways, onto the first pick: East Side King  2.
Recently, trailer food hasn’t been impressing me. I shutter at the thought of eating another Gourdough’s donut… ugh. Torchy’s dinky and flavorless tacos can suck it, and let’s face it… the Chi’ fries at Chi’lantro are just a failed attempt at improving something you’d grab at sonic or a basketball game. I was beginning to think trailers were all just a gimmic, a bandwagon that everyone was jumping on to make a quick buck.
But there are some trailers that are gems, ran by people who actually know how to cook and utilize trailers to deliver gourmet food to people faster, cheaper and more casually than at their sit-down counter parts. (like odd duck)

East side king uses a special grill called a “binchotan” which uses special charcoal to give the meat a unique smokiness. This charcoal can get quite pricey, the chef told me that the most expensive kind is actually made from petrified wood.

There are 2 East Side King locations, and they have different menus. The original, which was featured on No Reservations, is located behind Liberty Bar on E. 6th. They serve up many dishes including pork belly sliders and beet fries. And the one I’ll be doing for the review is located on Rainy St behind Bar 96, and they specialize in yakitori.

In the end I chose to get numbers 3-6, and since it was cold a suggestion for baked Japanese sweet potatoes was welcomed as well.

The #5 Butabara is a skewer of braised pork belly and apple topped with Japanese mayo, and bbq(yakitori) sauce.

I love that pork belly is becoming more and more trendy. The logic is simple… pork belly sliced up = ~bacon, and bacon = good. In the beginning you could think, “Wait a second I’m eating a huge chunk of pork fat.” But once it starts to melt in your mouth and your eyes start glazing over… you’ll forget all the negatives.
Japanese mayo and bbq sauce are both a lot sweeter than their American counterparts, and along with the apple, they compliment the savory pork very well. I wish the pork belly would have been a little more tender, and I think if they crisped the fat somehow this one would be phenomenal. For 2 bucks, it’s a nice quick fix if you’ve been craving the stuff, but I think you can get better at Odd Duck or any decent Chinese restaurant (ho ho or asia cafe).
The #4 Gyutan includes beef tongue, bell pepper, yakitori sauce, and honey wasabi. I find tongue to be the most tender part of the cow, but usually opt for other cuts since it usually lacks flavor. This yakitori proved to be the opposite, the flavor of the tongue was fantastic, and the surprise kick from the wasabi brought it all together. Highly recommend this one. 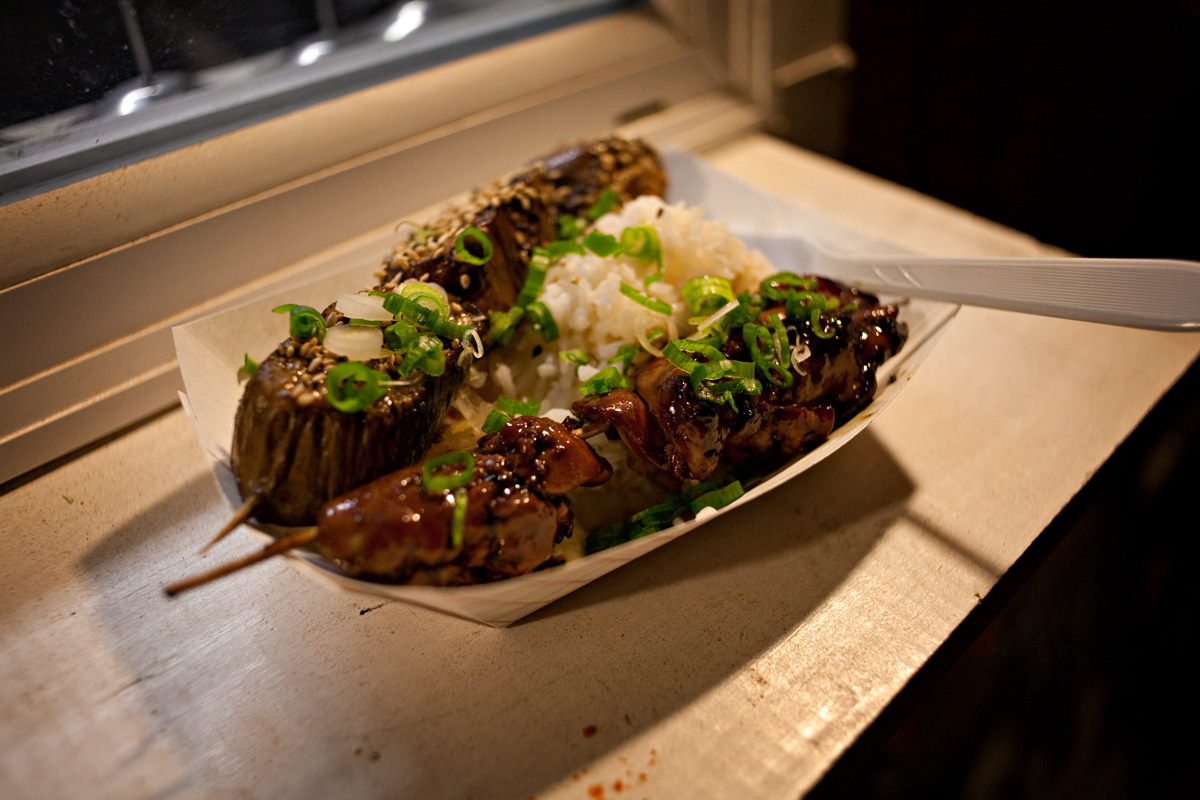 The #3 Kimo, which was chicken liver and yakitori sauce was my favorite. First and only thought, “OMG, It’s so CREAMY!!!” A bomb of awesomness in the mouth.

The #6 Nasu Dengaku is an eggplant skewer with sweet miso. I love the consistency of grilled eggplant, but it usually takes quite a while for it to become soft enough. I wish the cook would have left it on the grill a just a tad bit longer. Grilled sweet miso tastes like chocolate, no joke… love it.

Japanese sweet potatoes are noticeably sweeter than their American counterpart, and paired with another helping of chocolaty sweet miso this turned out to be quite nice piping hot, rich dessert. A great dish for a cold day. 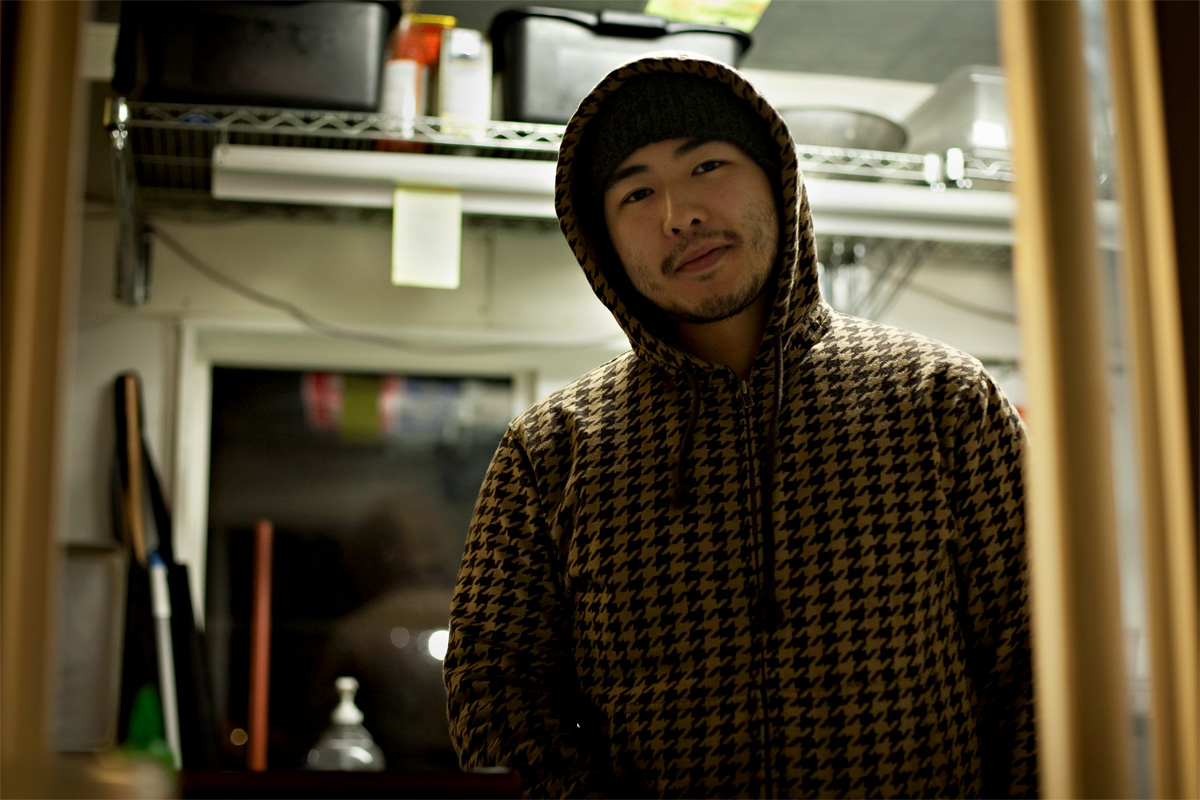 Service was amazingly friendly and quick. Can’t lose with such a skilled and chill guy manning the grill. It all amounted to 11 bucks, quite a fair price considering all that flavor.

If you miss the yakitori joints on St. Marks in New York or elsewhere you’ll be in for a comforting treat, you can FINALLY get them in Austin! I usually try to go to a place more than once, but this place was interesting enough that I wanted to make a post right away.
Recommendations: Get a couple beers at the bar next door to get a nice buzz going, get 4 skewers (mix and match), and enjoy.

Forgot to mention, I have a yelp page too: http://patricklu.yelp.com

And if you’d like to see some of my pictures, please take a peek at my photo blog: http://leicapat.blogspot.com
-Cheers,
Patrick