“I could eat my body weight in sushi.” Mikey Way

RA Sushi opened its first location in Old Town Scottsdale in October 1997. Benihana acquired Scottsdale-based RA Sushi in December 2002 and has now expanded to more than 15 locations to the United States. RA Sushi has very extensive selection of different kinds of sushi rolls, nigiri, and speciality rolls. Their appetizers are rocking! Everything was fresh, I didn’t smell any fishy smell on any of the sashimi and the staff was extremely nice and helpful. The sushi chef was the bar was patient enough to periodically check in on us time from time and answer all my questions throughout the night. I’m loving the atmosphere! I do enjoy traditional Japanese sushi restaurants but RA Sushi offers the new hip and modern. There is also outdoor seating with tables and couches lit by candles. They have a broad range of cocktails as well, which I wish I got to try, Saketini, Budhha’s kiss, Blushing Geisha, and Tsunami Punch, which is served in a fish bowl! The pricing is pretty affordable and everything listed before is half price during the Happy Hour period.

Viva Las Vegas Roll.
Kani kama crab and cream cheese rolled in rice and seaweed. Lightly tempura battered and topped with spicy tuna, kani kama crab mix and sliced lotus root. Finished with a sweet eel sauce and spinach tempura bits.
¡Viva Las Vegas me baby! I LOVE this roll. I cannot stop raving about it. The lightly battered roll is super crunchy and then topped with this super creamy spicy tuna and kani kama crab mix. I couldn’t stop slowly picking away at it. And the sliced lotus root chip? Genius! 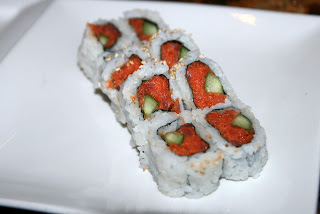 Spicy Yellowtail.
I did some research on Yellowtail and apparently it has high oil content, which is why special arrangements should be made to the spicy sauce.
The Yellowtail was super creamy and the cucumber added a nice crunchy control to the sushi roll. Topped with toasted sesame seeds.

Yellowtail nigiri and Salmon nigiri.
Long slices of fresh yellowtail and salmon nigiri. Yellowtail, also known as Hamachi, has such a high oil content that the soy sauce that it literally gets ‘repelled’ off the fish. After the fish is rich, the oils have a clear, and sweet aftertaste which is accompanied with a bold taste of the flesh. [Source: Sushi Encyclopedia]
Salmon is an oily fish that has a mild to strong flavor along with a rich and semi-soft texture. It is very high in omega-3 and vitamin E. It contains a few essential amino acids that are beneficial to muscle repair and is considered a better alternative to meat for athletes.[Source: Sushi Encyclopedia]

Tootsy Maki.
Kani kama crab mix, stuffed with shrimp and cucumber. Topped with crunchy tempura bits and drizzled with sweet eel sauce.
This is one of their must-have speciality rolls on the menu. 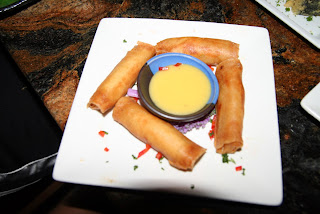 Lobster spring rolls.
Lobster mixed with mango, cream cheese and milk peppers, wrapped in wonton paper and lightly fried. Served with a mango sauce.
I didn’t taste any mango at all, in the spring roll or in the sauce but the spring roll was surprisingly light. 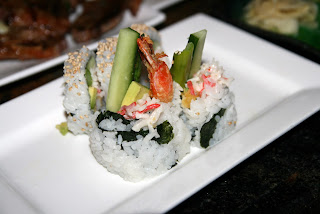 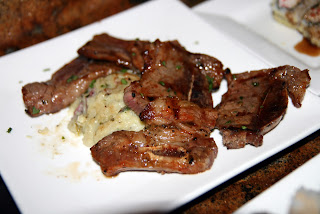 Grilled short ribs.
Marinated and grilled Kalbi beef short ribs toasted in a sweet and tangy yakiniku sauce. Served with wasabi mashed potatoes.
I’ve never heard of wasabi and mashed potatoes but it was surprisingly good. There was only a hint of wasabi so no worries to those who are scared of wasabi.

Shrimp tempura.
Lightly battered shrimp served with a tempura dipping sauce.
I was surprised on how authentic the shrimp tempura was. Not a heavy American style batter but the light, flaky Japanese style batter. I’m not talkin’ breadcrumb coating but light batter made from cold water and soft wheat flour.

My favorites from RA sushi would the Viva Las Vegas Roll and the shrimp tempura. I would definitely go back for more sushi and a drink or two! ♪ Did I mention I can’t stop bumpin’ to the music on their website? ♫

RA Sushi is contributing to Breast Cancer month by donating 100% of it’s profitsto the National Breast Cancer Foundation (NBCF) from the sale of a glass of California Chardonnay and Pink Roll from October 15 to November 15.

Check out the website for a location near you.

8 Best Restaurants In Dallas To Check Out ASAP